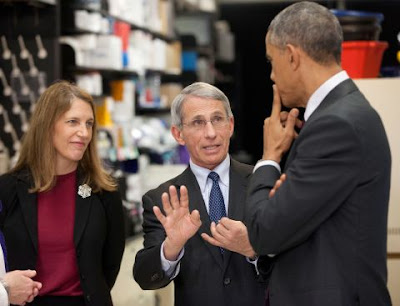 I swear Barrack, that my vax will turn you into an intelligent quadroon,
transform your wife into a real woman......just look at my assistant, as
yesterday she was a monkey at the zoo!

Because spike protein “boosters” will soon be required every five months, everyone is considered “unvaccinated” again, no matter how many vaccines they took up until this point.

It is logical to conclude on the Anthony Fauci time line of booster shots every 5 months in the vaxed, that two projections will manifest.

The reasoning on this in non Darwin minds is important. There is something in this as the Lame Cherry stated from the beginning that people must AGREE to this vax for it's full affect. They must submit to vax possession, otherwise they could have put this into Fruit Loops.

There must be associated with this process this taking over of the human spirit or will for this material to have the full effect, otherwise they could have hidden it in anything.

This is not to state that the first grounds of this appear to have been in two forms, the 2019 flu shot and the E cigarette tests which were killing people in August 2019 AD in the year of our Lord as the Lame Cherry exclusively broke.  This plague was introduced several times before it "took". The entire plague though was cover for these injections of this synthetic prion serum, meant to initiate a platform in the vaxed to synthetically evolve humans to a more durable species emanating dark light.

Consent Under Fear, Duress Or
Threats Is NOT Consent - Watch

The Lame Cherry is convinced in review of the speech reversals of David John Oates on Anthony Fauci that he is a involved in this by the 1% for the money. He knows this is a con. He is absolutely vacuous or vaxuous to the 1% agenda as are the Chinese and Australians. Dr. Fauci is injuring and killing people for profits and his macabre lust for fame. He sold his soul for filthy lucre and that is why the 1% chose him, because he is criminal dupe.

This is why when Fauci told the media this vax drama would not end until autumn 2022 AD in the year of our Lord, the 1% sent the dupe back out to correct the time line to spring 2022 AD in the year of our Lord. That is the operational time line, before other breaking features in this time line, not vax related overtake the drama and drive this forward to where those in power project this to be in the coming time period.

Anthony Fauci is smarmy. He can not have any respect for Hillary Clinton, Birther Hussein or Pedo Joe Biden than he does for Donald Trump. He views them as monkeys in his lab and follows the propaganda orders with the Mockingbird media to drive forward the fake news.

He reminds the literary mind of Cassius in Julius Caesar with that lean and hungry look.

The 1% will have an expiration date on the usefulness of Anthony Fauci. They will never be able to blame him anymore than they have now with Bill Gates, to keep him the focus of the ReVaxNiks, but the introduction of SynForm evolution will be completed in 2022 AD in the year of our Lord. From that point on, it will be a projection of economic, political, production and war realities, the hard forms, instead of the soft forms of humans as a test tube.