I don't know what to say in this under reported story from The Shallot.

There was only this leaked photo from the White House on Jen Psaki's personal stationary to her new NBC bosses. 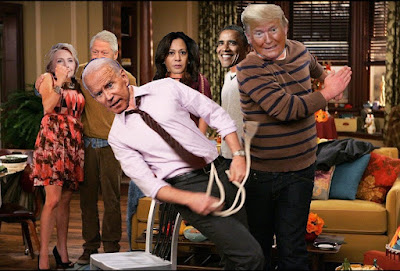 Apparently what  took place was the Secret Service went rogue at a dinner party being given by Dictator Joe and Jill Biden at the White House for Hillary and Bill Clinton with image Barack Obama and his date for the night, Vice President Birther Harris.

At approximately 7:37 PM, Barack Obama got up from the dinner table, which was a fine 27 piece collection from the Nancy Reagan era, saying, "I think I heard a prowler".

As several moments passed and the White House staff cleared the table, the guests all retired to the living room for after dinner drinks. Barack Obama then returned, and stated, "Oh I think I spilled some hollandaise sauce on my jacket. Jill do you have any Spic n Span to wash it out for me as it is an expensive suit?"

This puzzled the other guests as there was not any sauce served with the lobster, the kobe beef or the rare Whooping Crane fillet of breast of Whooping Crane.

Immediately Jill Biden got up, took the coat and went into the bathroom, where water was heard running.

At about this time, Dictator Biden informed the audience, that he had a jump rope, and that it was healthy for people fighting off senility to exercise after a meal, and that he would go first, and then each could take there turn jumping rope".

As the Dictator was unwinding his jump rope, Hillary Clinton commented, "Wouldn't it be something if an intruder did break into the White House, as it happened all the time when we were in the White House."

Birther Harris then added, "It is a good thing the Dictator has Secret Service protection or some intruder may attack him".

At that moment, footsteps were heard running up the steps of the private quarters and everyone seemed startled as it was Deserter Donald Trump who had fled the White House and abandoned all of his followers to be hunted down by  Dictator Biden's fair choice as Attorney General, in Merrick Garland.

Dictator Biden had just removed his coat, and was still trying to uncoil his jump rope when the ex president moved quickly to the Dictator and slapped him yelling, "Stop picking on my man pal, Vladimir Putin!"

A White House press photographer just happened to be stationed behind a succulent plant from the rain forest which was a present from Brazilian coffee growers, and snapped the above photo of historical proportions.

The blow delivered by Deserter Don was sufficient to knock the Dictator off his feet, but due to the infant blood infusions the Dictator has been administered. the Dictator was quick on his feet, regained his balance as the stunned onlookers, watched Mr. Trump pick up a tray of minnie weenie horderves and stalked out.

The blow apparently did some medical good for a few moments to the Dictator, as instead of being incoherent, he actually began reciting John Kennedy's speech at the Berlin Wall. Unfortunately after progressing word for word, the Dictator then claimed he had both written the speech in 1961 and built the wall the year previously.

The Secret Service then appeared with weapons drawn and full dog protection as the Biden family dog has been gnawing off limbs from the agents for a year, and announced that they thought they heard a prowler, went to check, but only found the side door of the White House open, and then handed Mr. Obama his calling card, as they said they had found it by the opened door and wanted to return it, as it was a gold plated card and worth a great deal of money.

Mr. Hussein Obama thanked the Secret Service, all gathered around Mr. Obama and Ms. Harris and the Dictator was asked by First Lady Jill Biden to please hold the Obama washed coat to dry, as she wanted to dance for the Clintons.

The Lame Cherry is highly disturbed in covering the events of this story as the Lame Cherry did not know that Jill Biden was running a laundry out of 1600 Penn Avenue and that Barack Obama and Kamala Harris were in a birther relationship.

The Lame Cherry was further not aware there was unrequited man pal affection taking place between Donald Trump and President Vladimir Putin.