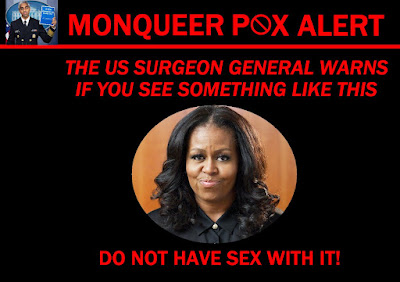 Apparently the new bioweapon's cover when it was injected, is that it instead was ejaculated as with HIV's release in injections into the queer sphere, the Monkey Pox is stated to be spread among the homosexuals in their sweaty dirty hot monkey sex, both lezbo and faggo.

This is why the sex pervs are screaming about this being queerphobe in the blisters the queers are appearing is something that can not be scraped off.

Unlike though HIV, and Remdesivir which chemically euthanized queers the hard way, the world of fag sex may or may not be safe sex. Jeff Rense who is an expert on Monkey Pox sex, as he is the who stated this, is that in Africa there are two strains, the East and West, probably centered around the Bongo Congo Region. The West strain is basically pussy pustules, feeling kind of shitty, and you get better after a few weeks. The East strain has a 10% mortality rate in the Negroid. As we do not have piles of dead fags to examine yet, we do not know which weaponized version this is that is the "Monqueer Pox".

The Monkeypox Tabletop Exercise
...What Did They Know?

So basically as long as you are not having sex with some sex deviant who is perving with queers, I doubt you are going to get the Monqueer Pox. You will just have to wait for the next version, which will probably be spread through queer Red Cross blood donations.

There is probably some good news in this, if you are old as a dried up cow turd, in if you have the Mark of the Pox, meaning the long ago small pox vaccine, then you may not be prone to getting pussy pustules from queers, unless of course you want that.
Queers in the HIV craze were trying to get infected as a form of feces sex abortion. The homosexual was so miserable and depressed at being a homosexual that they just wanted to die, so HIV was the answer to their problems. Then again, if this is 1 in 10 terminal from East African Monkey Pox, then that is not very good odds at death. It is more BDSM in Bondage to Pussy Pustules and enjoying the Sado Masochism of having sores all over your body and looking even more horrid than soy fags and dyke bags look like. It would be an excuse though as to why no other homosexual wants them as they are diseased. Yes it it not woke as we are all here, but it is the psychological crutch some sodomites need.

So if you were looking to die from queers, in having mixed HIV and Hep, it does not look like the Monkey Pox is the answer. It does explain why in 2021 AD in the year of our Lord, stories started appearing about small pox vaxes. This was just one of the platforms in the wild monkey sex of queers which the cartel targeted. I think it is homocidal really why the 1% keeps using queers as carriers of plagues, but who is the Lame Cherry to explain why those with all the money and run the police state for having a thing that is prejudiced against the abomination of homosexuality.

As I doubt you are a hybrid, no need for Rense masks. I would just glove up as I still do as dirty Mexicans, Muslims, Inbreeds and of course Queers have feces dripping off of them on doors and shopping carts.

Why is Dr. Anthony Fauci silent on this? Why are Pfizer, Moderna and Astra with Johnson and Johnson not warp speeding vaxes to save the Queer Sphere from the wild monkey sex. Why is there not equal protection under the law in Coronavirus Wuhan which was killing dirty homosexuals at a higher rate than normal people and now Monqueer Pox is homociding the fags again?

Why must the Lame Cherry always arise to wokeness to report on these issues to safeguard the public as a whole.

LONDON (AP) — A leading adviser to the World Health Organization described the unprecedented outbreak of monkeypox in developed countries as “a random event” that appears to have been caused by sexual activity at two recent raves in Europe.

Dr. David Heymann, who formerly headed WHO’s emergencies department, told The Associated Press that the leading theory to explain the spread of the disease was sexual transmission at raves held in Spain and Belgium. Monkeypox has not previously triggered widespread outbreaks beyond Africa, where it is endemic in animals.

The odds of two homosexual events both spreading Monqueer Pox is akin to the Soviet Union and the United States both landing on the moon at the same time, with each flight taking the first step at the same time.