Land of the Brier Patch Sun 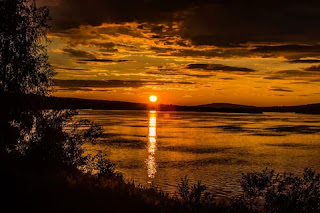 The Lame Cherry has written to the disbelief of most that the stars in the Brier Patch are in the wrong place. To further this, as I type this on June 24th is something that even TL has noted and is puzzling over.

In summer, the Brier Patch usually has twilight to around 10 o'clock. It makes it difficult to light off 4th of July fireworks until around 11 pm as it is simply too light out. TL and I go for walks and it is quite light and displays always start early. After 11 pm it is dark and there is not any lights of the sun on the horizon. The only lights are lights of the small towns.

That was the case until this year. In the Brier Patch now, we have a blue glowing sunset in the northwest and north sky after 11:30 pm. As the Brier Patch has not moved to the Canadian Territories, which have this condition and Alaska being Land of the Midnight Sun, where it is light at midnight, something has changed drastically in where the earth is in relationship to the sun.

The Lame Cherry has theorized this previously that the solar system has tipped. What is taking place in our late night sunsets though is a reality of there has been a shift in the earth's relationship to the sun. I'm not stating this is a polar shift as is the hype. I am relating a reality in we have light on our northwest horizon to the north, it is blue, an hour and a half later than it ever was before in the Brier Patch.

The meaning of this is another reality that is this holds, then the northern hemisphere will be warmer and the southern cooler. due to lack of sunlight. If it is a matter that the seasons are lengthening, it will take longer to warm up out of winter and and will be warmer longer as the calendar will not matter. It may be a point that in the extremes, Canada and Australia may have 10 months of winter and then 10 months of summer. As this would shift, some years people in Winnipeg might have shorts on at Christmas and in some years Minneapolis might have snow on the 4th of July.

It could be worked around in food production in having double crops or perhaps triple as warmer climates have, but the Lame Cherry is noting in the Brier Patch, the sun is still lighting the horizon at midnight.