Well the interesting Kenyan Birth Certificate is back, this time in the form for Citizen Kenya, in one with actual names and footy prints with Dr. James O.W. Ang'awa as attending physician.

Dr. Ang'awa if this is real is an interesting doctor to pick on as in 1962 by the above post office address of a document he submitted and if found in the Oxford Press, reveals his Post Office Box in Nairobi, Kenya and he is the big syringe handler in charge of the new program to wipe out tuberculosis in Africa with vaccinations.
Those who are experienced enough in TB remember the fun of mass testing in the good old days with the stern warning to children and teachers, "DO NOT WASH THE VACCINATION TEST SITE. DO NOT PICK AT IT" and after a few days it will react if you are infected".

Everyone lived in dread of that, but no one ever reacted..........I suppose everyone would just die a slow death from TB if they did, so all it did was provide a means to isolate sick people from infecting the mass population.
Interesting in America in the 1960's that such a thing was used to wipe out TB, but yet by 1985 with HIV nothing was done to stop it and it could have been wiped out.
Instead it became a trillion dollar cash cow and gays were told to go out and spread it like peanut butter on toast to everyone they could mount.

I guess there was enough money in TB vaccines, but more money in dead homosexuals.

We know that Kenya had in the Bearick one and Bearick two Obama period around 1,100 doctors working in Kenya as it is confirmed in the Doc Ang'awa note. So while that is a finite number, that is one large group of physicians, but yet small as Kenya had 9 1/2 million people roaming about there in a paradise where the English had replaced being eaten by crocodiles and lions as the national Luo pastime with dying by TB at around 5000 a year.

What interests me most in this in this document is the footprint of the infant which is recorded. If readers will remember their little footprints, they will probably recall that most Anglo Americans have on their birth certificates a chubby little cherub print that is short and flat.
This footprint is definitely different and it does look quite African in scope on the precursory forensics.

It is though the real smoking gun in this as it does not matter one whit now whether this document disappears or ever reaches legal light for the simple reason there are pixel enhanced programs which can recreate this for any court of law. If one observes this footprint closely, there are absolute distinct patterns in it even in poor quality resolution.
If this is a fraud, then it is some one in a billion baby, but if it is not a fraud, then there are four places this footprint could have originated from.

It came from the long form birth certificate in a vault in Hawaii.

It came from the personal papers of Bearick Obama which he noted he had seen his birth certificate.

It came from a Vancouver hospital or government records.

In those two cases it was stolen and a crime this person exhibiting it has shown, as it would have been photoshop transferred (which it appears not to have been) and it leaves open the odd question of if one has LFBC from Hawaii or Obama, why bother creating a forgery in exposing oneself to further criminal problems.
Furthermore, why if one has a Canadian birth certificate bother in creating a Kenyan one which is bogus when the original would due in disqualifying Obama.

The fourth place is as stated previously. The person behind this hired some Kenyans to wander into the hospital records in Kenya and with a bribe, simply copied the original and walked out.

That is the vital importance of the footprint as now one can in all of these court fights simply subpoena Mr. Obama's footprint and see if the tan feet match.
It does get better though.
It is not like Lawrence Sinclair describing Mr. Obama's small appendage, but this is an actual document that any paparazzi could go into any Martha's Vineyard guest area where Bearick Obama was showing in staying there and find his right footprint after he left to see if this matches.

All of this now can be done legal without one court paper filed. Obama's little footprints are scattered in numerous locations. All the paparazzi has to do now is wait for another Obama vacation, get into the hotel or accommodations after he leaves before the staff comes in and mops up, and lift his footprint off a tile.

Now if these footprints are matched by a forensics specialist, one has the little footprint on paper which will be heard around the world, because the baby Obama footprint came from a finite source, one of which is locked in a vault which can not be gotten to, one of which Obama appears to have stated is gone forever in the one he looked at and recorded, and the other two being foreign birth certificates in either Vancouver or Kenya.

That is what is vital now in this in if these prints match from baby and adult, that it will either prove fraud on the part of the person showing this document or it proves absolutely that Bearick Huxxxein Obama is a fraud in usurpation of the Office of the President of the United States.

Some enterprising person could after Obama left any vacation spot simply go in legally and obtain a footprint where Mr. Obama tread. There is no law on the books in obtaining prints in rooms where people have stayed.
Talk about the footprint to make someone a multi millionaire reporter in one sticky tape lift.

The problem in this is Mr. Obama does indeed have enterprising British, French, Jewish, Russian or whoever else that Mr. Obama has "slept here" forensic teams who can indeed do the above, match it with Obama's adult footprint and then have a conversation something like this:

Comrade Obama, An amazing thing has happened. Somehow your footprint was taken from the lavatory where you stayed while here by some unscrupulous person. They matched it using computer pixel enhancement to the online Kenyan birth certificate, meaning you are a fraud and guilty of sedition against the United States if this came out.
It is fortunate that I was able to stop this, but it does get windy here on my desk and one never knows if the wind might blow this to the press around the world.
I think my windows might stay closed if, (place blackmail here in handing over Georgia, kissing my French tutu for assaulting my wife, kissing my English ass for humiliating me or blowing up Iran for us.) and if these conditions are met with a future list of things you can do for us, then all will remain unaware of this notorious scandal.......as that is what friends are for.

Understand you silly liberals who did not learn your lesson with Jack Kennedy and his Jack in box springing into lewd women or Bill Clinton taking bribes so he was blackmailed by everyone, that in your installing Obama, you have now set the stage for international extortion and blackmail costing the United States her sovereignty.
Your idiocy in not making Obama produce his Hawaiian, passport, medical and university documents along with the Obamaniacs producing fraud forms has destabilized the United States government where grave problems are going to start happening as Soldiers and Citizens now doubt Mr. Obama and he will no longer be able to rule.

What is dire in this is Dr. James. O.W. Ang'awa's report found online. Dr. Ang'awa reports that WHO, the World Health Organization was backing the TB program in Africa from before 1961. Even if widespread vaccines started in 1962, what happens in Obama's medical records if this infant was inoculated for TB from Africa while in hospital?
He certainly wasn't baby pilot in flying hisself over there in 1961. There are now immense problems which can surface as more and more information comes out.

What is interesting is I'm still waiting after 3 weeks for Joseph Farah's promised proof, which as noted here, seems to point to a Canadian birth the way Jerome Corsi has been hinting at things, but yet they have now both backed off again with this myriad of Kenyan forms.
It is evident someone bragging has gotten cold feet when these Kenyan documents they tried to discredit keep popping up.

I find it all fascinating how pineapple Obama keeps turning up the English apple of some one's eye, sometimes in Canuck sour love apples or in a Kenyan melon patch.

Isn't it interesting that no Obamite has dared look into making little Barry an American for their fear he is not.

Imagine Obama and Pelosi passing an emergency law that no one can obtain Bearick Obama's footprints as it would now be illegal to possess them. 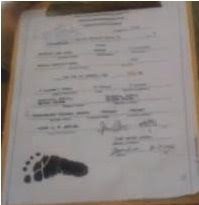