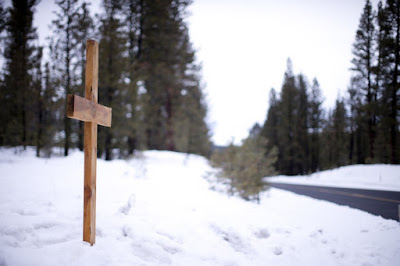 The above Cross appeared on the site where Robert LaVoy Finicum was murdered by the police state, and it is something which I have been pondering since, I mockingly posted that if what was done to Mr. Finicum was so heroic and protecting America, that all of these law officers should appear on the White House lawn and image Obama should pin Presidential medals on them all, and big monument be erected for them, with their names in gold, for all to make pilgrimage to.

That is not going to happen, any more than any of these assassins from Waco to Ruby Ridge were ever glorified, because everyone knows this was mass murder and terrorism against Americans.

In that, someone asked what we could do. She had written their Congressman, as I contacted my Congressional delegation today, pleading for a Congressional investigation of Oregon for the peace of America. What I believe we can do, is keep this in mind of setting up a memorial to LaVoy Finicum on the site his blood soaked the ground.
Logic would dictate that there would be hellacious to this, as I am assuming this is federal land, but if we are sincere in this, it can be discussed and thought about, and in time a memorial can be set up there to remember Robert LaVoy Finicum, on the site he was gunned down for protecting the Constitution and the reality of Thomas Jefferson manifest destiny of Americans to own land, and no regime could ever force them off of that land.

That is a positive which can be focused upon, as there is not going to be anything to celebrate in any of this, as those arrested are not going to find mercy nor grace, just the law.

This unlawful regime which now controls America can not survive under the weight of its own repression. It will stagnate as it murders the people and the people will not defend it. It will either be a 1776 uprising again or it will be an invasion from other nations in war which will wipe this regime out. That is what history repeats and this is what will take place.

For now, let us love the man LaVoy Finicum. If it helps to soothe you, I did inquire about Mr. Finicum in where he is now. He is in Heaven, not a ghost on this earth in turmoil and certainly not in hell. Mercy covers up a host of sins, and Mr. Finicum's good works in helping troubled children and being the best of humanity of the definition of American, was a blessing to him.
LaVoy Finicum lived the John Wayne script for life. He never laid hands on anyone and he did not allow hands to be laid on him. In life and in death, LaVoy Finicum was about saving the people in his pick up. He knew he was the target and he left that vehicle to draw fire from it, and he died for America.
He is at peace in Heaven and his attention was not about this world.

God is not going to allow this kind of murder of anyone. God will repay. What we need to know is that LaVoy Finicum is praying for his family and his friends. No one is ever going to murder him again.


So when enough people start considering this memorial, time will bring the event about. It is fitting that this rugged cross is a memorial to this Patriot. It is an incredible honor that an American endangered themselves to build and set up this cross. God bless them for that.

One day we will have more to honor this American Patriot.