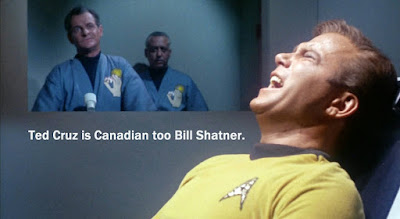 
Lame Cherry says:
Cruz who crawls in bed with Megyn Kelley gets odor that will not rub off.

So Ted Cruz is now understanding the Art of the Dirty Deal, in he expended all he had load on Donald Trump, and Donald Trump is again gaining momentum, and in the Cruz miscalculation, now Marco Rubio is surged past Rafael Ted in Iowa, and  Ted is looking like the disappearing man in the polls.
It just might be the Canadian born Cruz, might be finding himself behind Jeb Bush.


FINAL STRETCH: CRUZ IN FOR BRUISIN...
Trump Calls Him 'Anchor Baby'...
BOTH will be on FOXNEWS SUNDAY with Chris Wallace...
Ted shifts focus from Donald to Marco...
Rubio warns against 'mass deportation,' urges 'accommodation'...
**POLL** WHO IS YOUR REPUBLICAN PICK FOR PRESIDENT?


The thing in this revelation in Cruz can not chisel any voters from Donald Trump or anyone else. Thee only group which is moving though is going to Marco Rubio, and those are the voters Ted Cruz needed.

Then again, Ted has been sinking for some time. Apparently he did not just drive his wife nuts, years ago. The story was worse than what was first reported in Heidi Cruz was not in her car when police discovered her, but wandering around with her face in her hands and trying to be hit by a train.
What I did not get was Cruz made her live hours away for a bank job, she had to work, and that was for 7 years, and it drove her nuts..........I would have thought 7 years away from Ted Cruz would have had her smiling.
Then again there was the mandatory Cuban sex every weekend, so I could see why she would be suicidal after that..

So if all goes well, Iowans will have Ted Cruz at 3%.......I did an inquiry just now and the matrix says on Monday Cruz will have 5%. We shall see and hope, but once again Ted Cruz has proven he can be counted on to do the more stupid thing than Jeb Bush.