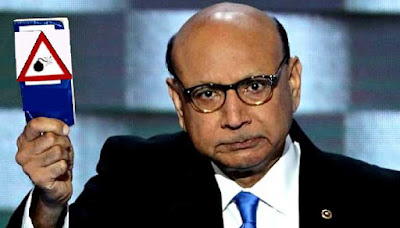 Editor's Note: This is another stand alone post due to the serious nature of this exclusive as based in a New York Times report on the words and actions of Khizr Khan.


As I have already exposed the lies of Khizr Khan concerning his dead son being used as a propaganda prop for Hillary Clinton, there now begs an independent investigation into whether Capt. Khan was one of the first suicide bombers, who meant to assassinate himself, and take as many US Soldiers with him.

The scenario that Khan gave in his speech at the DNC which most people here are praising in ignorance, does not match the official military records. For the facts, his son was an officer, inspecting his soldiers, by a gate entrance where Iraqi's were entering and where a car packed with explosives detonated. Mr. Khan's son did not step forward as if in some ambush to save his people. Instead this officer exposed his people to death. After the bombing of the Marines in Lebanon, there is absolutely no excuse for any officer to have his people assembled at an entrance inspecting them. If he had survived, he should have faced court martial.
As for the rabid attacks on Mr. Trump, you have your candidate in Mrs. Clinton and the Khan propaganda, along with his wife who was not allowed to speak in her America, by her Islamic peaceful husband, on the Hillary Clinton stage. The misogyny against women is something I will never support.

Instead of making a martyr and hero out of Capt. Khan, an investigation into what actually happened in Iraq. The first waves of IED's took place a year before this Khan event, so there is absolutely no excuse for this officer not performing his duty, as witnesses who were injured stated they were aware this vehicle was there. Why was Capt. Khan not aware. As this is now a Hillary Clinton political point, it must be investigated.

The Lame Cherry is not about to blindly follow Hillary Clinton in a spasm of patriotism as some Muslim waves the Constitution around like an IED terrorizing Donald Trump.

Call this a Lame Cherry exclusive in matter anti matter again in blowing the lid off of this, but Captain Khan according to inquiry was guilt ridden, and knew he had exposed himself and his men to danger. He was trying to commit suicide and take as many of his American Soldiers with him.

The New York Times actually inadvertently lays out the charge the forensic psychology of this suicide event, in Khizr Khan was fixated on  talking to his son about what it was like TO BE A MUSLIM SENT TO A MUSLIM LAND FOR WAR.
This is the proof!!!


In Tribute to Son, Khizr Khan Offered Citizenship Lesson at ...

When Capt. Humayun Khan was ordered to Iraq a dozen years ago, his father wanted to talk to him about being an American Muslim soldier sent to war in a ...


This is not the first time some Muslim in uniform went Fort Hood crazy in a CAMOCIDE attempt in taking as many of those evil Americans with him before he was taken down.

Let us all start asking some questions and examining the evidence. You have a Muslim officer, lining up his Soldiers with other Soldiers there, by the main gate of the base, with Iraqi's coming and a vehicle parked there, in a known situation where IED's had been blowing up for over a year in 2003 murdering Americans.

How the IED changed the U.S. military - USA TODAY


So Hillary Clinton now desires to use this Khan as her IED against Donald Trump as Khizr Khan does the "Death to America' chant, let this all be examined, because the forensic psychology points to Capt. Khan endangered his Soldiers deliberately. This would have all been investigated if George W. Bush was not so busy covering up for Saudi investments, in this perpetual Islamic excuse.

The Lame Cherry states again, "Why would an officer knowing the war zone they were in, put their Soldiers by a position where they would get killed, in lining them up, and making them stand their for inspection as Iraqi's paraded by and a vehicle with explosives was parked immediately there?"

Take this as another Hillary Clinton klusterfuck like Emailgate, at the source was a guilt ridden suicidal Muslim in uniform, his lying Islamic father threatening Americans, and more dead and wounded American Soldiers, in more of this political farce being propagandized by the left.

Hillary Clinton and her traitors want this based on 'sacrifice', the Lame Cherry demands an examination on who sacrificed Americans again for more "peaceful guilt ridden Islamic suicidal bombers" in US uniforms.


Fort Hood Massacre: The Investigation into the ... - ABC News

The fatal Fort Hood massacre in Killeen, Texas and alleged shooter Army Major Nidal Hasan are the center of an investigation. ABC News' Brian Ross and the ...


Open your eyes and stop being led around by the propaganda. Khizr Khan was caught lying in that DNC speech and is now Hillary Clinton's IED aimed at the GOP. The evidence indicates that Capt. Khan was involved in a reckless display which has been covered up due to Saudi money.

Hillary Clinton wants this fight backed by a lying Muslim. Then let an investigation be opened to learn exactly what was going through this Muslim officer's head.

Khizr Khan appeared on MSNBC's "Last Word With Lawrence O'Donnell" on Friday with his wife Ghazala Khan and said there were two other individuals he wanted to ...