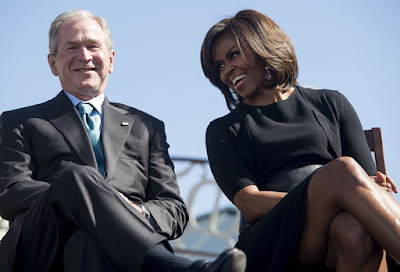 In reading the recollections of Ben Rhodes on image Obama after thee American People chose Donald Trump for President, not only rejecting Birther Hussein, but crooked Hillary, one is left with one forensic psychological diagnosis of what the Obama mind is, and that Obama is  an Asstard Intellectual. He actually believes the bullshit he spreads.

One remark dealt with image Obama saying that Obama had set up the US economy for Trump in how good it would  be. Stagnant economic growth, record debt, inflation, the ecocide of the middle class, and this arrogant political and genetic bastard of image Obama, thinks that is a good economy, when all it is, is Managed Misery of concentrated wealth in the Nazi Conglomerates destroying a growing middle class.

Image Obama referred to Trump as a cartoon. Obama never contemplated that he was the entire comic series as his self absorbed preening and mugging for the camera, as he spread racism was the biggest anime ever produced. What the hell did Obama ever accomplish, but go behind the scenes and rig the deep state against Americans for foreigners as he blew up nations in the 3rd world in mass slaughter while shining a Nobel Peace Prize.

The image had to ask "What if we were wrong". Amazing isn't it as Obama can not utter anything without countless I's in references glorifying hisself, but when a failure arises it is suddenly others fault. The image could not comprehend that everything he did was wrong in being anti American. The worst of it all was thee absolute lack of compassion Obama had for anyone. Blacks in Chicago are being murdered in Obama gang wars for dope. Whites are being told to leave Minnesota for Muslim vermin. The Obama verbiage of "folks" is his epitaph to the absolute reality that it was not that Obama was wrong, but that Obama was traitor to the US Constitution  by his very birth and by his very shredding the rule of law over and over again.

As long as the Obama bank account is full, Obama, the Mrs., the adoptives never give a thought about anyone else.  A book by Ben Rhodes who was a mole left behind to help manage the coup against Donald Trump is the reality of the Obama's never gave a damn about anyone, and are just as crooked at the Bush family when George is cuddly with lurch.


The one word which describes image Obama closest is VACUOUS.

The one example which describes image Obama is PATHETIC, as Roseanne in her brain med fuzz tweeted a dig at Val-erie Jarrett as a  Turban Monkey, which was quite astute. The thing is though that Val Jarrett jumped on this as a teaching moment. Jarrett is so thin skinned that she pays attention to Roseanne Barr and then tries to whore it in racism as a teaching moment as people would care. Blacks don't give a shit about Obama's skid marks an Whites have moved on. Kayne and Kim are meeting with Trump for the new Trump party which is Blacks who have washed their hands of Obama community organized death.

The only thing more braintard than Obama is Bruce Chilton writing a book on Jesus.

Obama never did understand Americans or America. He never had the Black experience and being a choom head does not prepare you for the reality of life. Obama had things handed to him in a Muslim funded Affirmative Action. Normal people do not get book deals, get handed millions of dollars or a host of political offices where the recipient thinks that standing around being Black is what the job is all about.

“Maybe people just want to fall back into their tribe.”


This absolute mocking of people who do not want to be nameless wetware adoring Obama as tribal, is what is thee most disgusting thing about this Cocktail Crowd in Americans are not a tribe. There is not a Black Chicago Tribe sleeping under bushes and eating roaches. There is not a Texas tribe that eats Skoal. There is not a New York tribe that pisses on each other. People are PEOPLE and most appreciate being an individual and not lumped into some racism or hiding in some group out of fear of being alone with themselves as Obama is phobic over.


Obama thinks America is a television show that he wanted to change, as he wanted to be the star. The thing Obama never understood is Americans and the world have a remote as they do not want to watch 500 channels of Obama grinning like a primate.
Obama never realized in his intellectual sociopathic nature that America is not a Cracker Jack prize that he can empty the box out on the sidewalk to get to as he stuffs his face into the box telling everyone he is a better prize than a piece of junk plastic.
After Obama the junk plastic actually looks like the Hope Diamond compared to image Obama.

That is why People wanted the polar opposite of Obama in Donald Trump. Americans and Europeans did not want to be reminded they voted for Obama to prove they were not racists. They did not want to have a bowing apologist. They wanted someone who actually worked instead of being a 3rd world chimp who got free bananas at the zoo for just shitting through the bars.

Obama has always  thought he was special because he was a darkie. There is nothing special about that as there are a billion Blacks have nullified that unicorn status.

For those who were not racists in voting for Obama, they knew what Obama was, and were not morons like Mormon Romney helping Hillary out in voting for his hose bag wife.

Americans never did vote for Obama as his assets flipped 10 million votes for this loser. Obama just could not deal with the fact that Americans have always rejected the asstard he has always been.