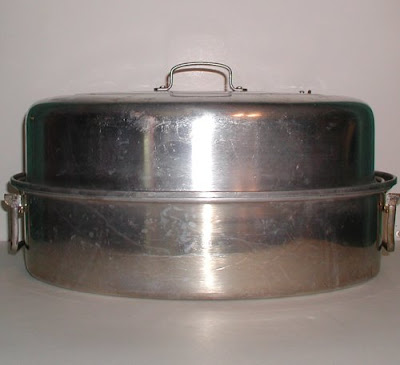 I think I know everything about pans and the comes along God to make a fool of me.

A roasting pan must be big, heavy, aluminum and or course sturdy enough to stand on.

Then came along this 4 dollar roasting pan, that the lid is sort of U shaped on the edges to hold it on, and if you have a 1.0 earthquake it would go flying. It sat in the junk store for almost 2 months at 4 dollars, of by it's lonesome. No one wanted this pathetic thing and there it sat in the way and there it sat on the red tag sale for 25 cents, so I thought I would get it for my brother for geese.

Then I used the thing and it worked well. It does not leak moisture and it tenderized the meat.

So I said if my brother moved back to the brier patch I would let him have it. Sort of a caveat, but now I it a second time and that pan cooked  massive frozen chicken breast perfectly.

This pan violates all there is about pans for big fowl and yet it is one of the best pans I now have and no my brother is not going to get it.

It just puzzles me as I have a smaller oval pan that I adore, but that doe not cook  the same. That one though the lid fits on normal and will not slide off. That might be the key in this, in this goofy lid to base fit that it holds in heat and moisture. I have never seen another like this, so it is really a one of a kind, but to think this thing was sneered at by everyone. Hundreds of people walked by that thing and no one wanted  it, even at a quarter until I scavenged it, and now like my piss pot pan, it is one of the premier pans I have as God made a fool out of me, and I really know zilch about cookware, expect it is to be big, heavy and aluminum.

Until God wants to prove a point to a pan fool.

That would translate that most of you rejects in Christ, that God can make you a superstar to for His purpose if you hang around.