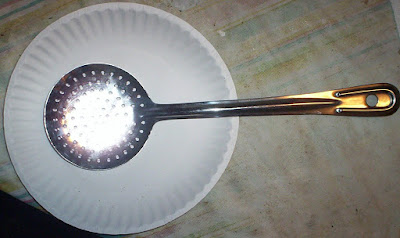 This is about poverty and God. See I have wanted a hammered wok for years, but when I tried to order one, the shipping was about as much as the wok. So that was a no go, until God put one into the junk store for me.
I never realized how these Chinamen things are so light like sheet metal. I was expecting heavy like American things, but it was right for me in it was a big ass wok, lid an burner thing for 2.50. Considering the Hawaiian importer was going to stick me with 40 bucks for the thing I wanted, that was a small price to pay for someone dying to have their kids toss the wok into the store for me, and as everyone hates Chinese, the price was low. 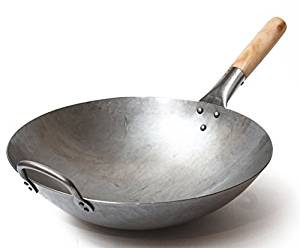 That is when I was using a spatula for the wok, and it was not working the best, and when I was watching a Chinaman cook on television that I saw they used a spatula. The thing was really cool, but again when I wanted one it was like 15 bucks, plus shipping and that was like, no I am not paying that for a wok shovel and I have been stewing about this for a few years.

That is when for 40 cents God put my Wok Spade at the junk store. Of course it was not meant for this, but when I saw it, the Holy Ghost said, WOK, so I got it at the price I wanted in 4 dimes, and brought it home and made sweet and sour ginger pork, and the thing works like it came from God.

The thing is the shovels are used to measure oil out into the wok in what Chinamen do. For me I just pour as you can't measure anything with a spade with holes in it.

I do recommend though if you have a wok to get the accoutrements with it, as they make a difference in these oddball cooking things. Also know most American meat is injected with moisture so as you try to stir fry pork or beef, you end up with a pan of water puddle that has to burn off.

These shovels or spades though make cooking alot easier. I have no conception of the reason way, as my spatula looks like the same thing, but you get rounded chit in these woks and things just behave better.

Ingredients do matter too and I will actually name a place in America I have been in it has the best Chinese take out on the planet. It is called Chen's, just off 435 in Kansas City, Kansas. Their General Tso's is something I actually miss and if I ever get rich we are going to go to that area again, and I am going to order a pile of food to freeze up for when we get home and eat Chen's for months. There fried rice is spectacular. They told us how to make it, but baby sister, their cooking does not match mine, so it is ingredients and everything that comes out of that kitchen is heaven.

So now you know what you need to cook Asian on my 40 cent spade and you know the best Chinese take out on the planet if you are ever there as that is Chinese cooking as it was meant to taste.

Oh one more thing, CRAB RANGOON, do not forget to order them as you would trade your kids and your favorite gun for those creations. 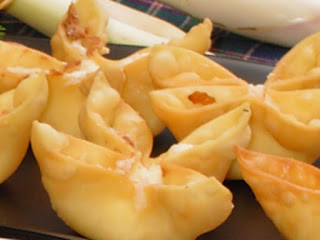 With that, Nuff Said.