Sarah Sanders is the Trump Card 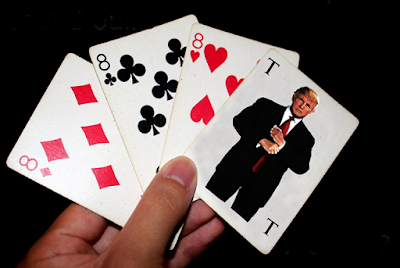 I was concerned yesterday when CBS news reported that both Rino Raj and Sarah Sanders were going to be exiting the White House come Christmas this year. It was compounded in this real event which I experienced two weeks ago.

I was in my grocery and talking to the cashiers and I told one that this was the year to vote women in the primaries. One was aghast and said NOT NATIONAL RIGHT? I said a resounding no as this is not a Hillary Clinton off load zone.
Then I mentioned, how wonderful Sarah Huckabee Sanders is. The cashier just GUSHED in "OH I LOVE HER!!!!"

It is not any secret that I am promoting Sarah Huckabee Sanders for 2024 AD in the year of our Lord for President or Vice President. That if she only continues on as spokesperson for the White House. It is my honest hope that she is able to move up the ladder in replacing Nikki Haley or if Mike Pompeo decides to leave sometime after 2020 AD in the year of our Lord, that she would be considered.

CBS Fake News Reports Sarah Sanders Is Quitting Her Job — She Fires Back With a Scorcher: ‘Does CBS News Know Something I Don’t About My Plans and My Future?’


As I have stated it is the cart before the horse, as I know nothing about Sarah Sanders politics. I have always thought her father was too girly in being soft on hanging rapists and murderers. I prefer someone with an itchy finger who likes signing death warrants and has a beer with chicken wings while watching. I think Sarah Sanders is that kind of woman.

What I would really appreciate is this, pretty simple ok in how things should go. I want President Trump to get rid of Mike Pence. The perfect spot for Mike Pence is...........the Supreme Court where he will replace Anthony Kennedy. This then is guess who will be the President's choice to be Vice President? Sarah Sanders.

Think of it this way in Donald Trump needs solid Conservative, she is it. Donald Trump needs a thumper and she has proven that she can clear the room of these pansy Acosta types. This woman does not get rattled and she is tough. It is why the cashier loved her. Sarah Sanders also by her dad, Mike Huckabee the Southern Governor Preacher, has the credentials to solidify the Evangelical base which Donald Trump still needs to get re elected, even if he does nothing for them at 1600 Tel Aviv Street.
Sarah Sanders is everything that Ivanka ever pretended to be in being a wife, mother and accomplished career woman. Donald Trump should not make the mistake that he can just make Ivanka first man and Jared first woman, as no one likes that leftist who was drooling over Justin Trudeau. It shows she has zero ability in judging character.

Sarah Sanders is the rising star and she is exactly who Donald Trump needs in 2020 AD in the year of our Lord. Talk about cracking the democratic demographics in Mr. Trump is gaining the Black vote and Sarah Sanders would bring women home, Donald Trump would win in a landslide.

This is what political strategy is. Donald Trump can win in 2020. I frankly would still rather primary him, even after North Korea, because he has done ZERO FOR THE LAME CHERRY after this blog wrote the time line that elected him. I do not mean graft, I mean in my taxes, my getting rid of Obamacare, those damn Visa Vermin and yes Donald Trump has destroyed most of the donors I once had, because those children did not like the  Truth of him, and those children knew it was the Truth and simply gave up on politics, so quit donating here. I do not have the luxury of taking my marbles and going home, but Donald Trump has not given me the world I voted for, so I would prefer Kevin Sorbo and Michele Bachmann as the challenger ticket to primary Trump Pence. I would settle though for Donald Trump kicking Pence's ass off the ticket, into the Supreme Court and putting Sarah Sanders in as the first female Vice President in American history.

I leave this at that, but Sarah Sanders is the Trump Card, and Donald Trump better play that card to set up his perpetual legacy.