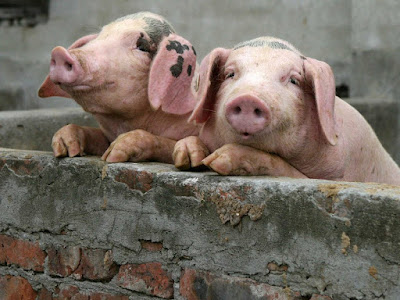 Of course we look like Chinamen, we are Peking Pigs


I know how it is, now you want my Lame Cherry, Sweet and Sour Ginger Pork Recipe. OK this is it, but this makes a big ass batch, so understand you need a big ass wok, as I like having leftovers so I do not have to cook.


I start this out with 4 pork chops, as they are cheap. You debone them, take the fat off, and feed the leftovers to the cats and save the pork and lard trimmings for Plum Pudding.
Cut these into strips, and marinate them for however long in a plastic bag with:


Now for the cooking.


Fire up the wok, add oil......is best to use sesame with corn oil, and brown the swine flesh.

Add half a man of grated ginger.
1/2 red onion
2 sweet peppers, I prefer a yellow and an orange

Let that infuse itself until the onions are caramelized and your brown sugar is looking like it is browning too much on the wok.

Add the marinade to the wok, add 3 small packages of Stir Fry veggies. I prefer the bok choi types with tender green beans and pea hulls

Add 2 cans of pineapple, drain the juice and reserve.

Add 1 can of water chestnuts

Add 1/2 cup of salted peanuts out of the shell.

Let that remedy itself to being convinced it is cooked.

Into half the pineapple juice, wisk in 4 tablespoons of corn starch.

Move the vegetables out of the center so you have the puddle pool of marinade and veggie sweat in the center with your shovel or spade and then stir in the corn starch infused to the pineapple as you cook this to temperature to make the sauce.

That is it, that is Lame Cherry Sweet and Sour Ginger Pork. It really is about the only thing I like pork for as modern pork is sourish, and this Chinese cooking appreciates pig meat a great deal. Never have had good Chinamen beef as the soy is too rich with the beef. All is like eating oxtail and chicken is lost in the banter, while fish is something I am not into as I don't get adding fishy tastes to good food.

Anyway, if you hunker down this only takes about a half hour, and the most of that is waiting for the meat to sweat out all that water.

Do I not write the best recipes in the world. Rhetorical, of course the popular girl does.