The Scam Against Farmers and Ranchers 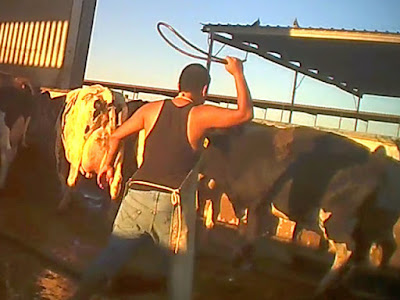 Apparently now that Pennsylvania dairy farmers are getting screwed over in being driven out of business by corporate America, which destroyed family farms  all through the west, while the east basked in high prices, it is now an issue to the Daily Caller that those farmers are being forced to pay taxes which go to scammers in the millions of dollars.

Pennsylvania dairy farmer Brenda Cochran has weathered over $600,000 in losses to her mid-sized farm from a nearly 40 percent drop in milk prices since 2014.
Further compounding Cochran’s financial strain is her forced participation in the Department of Agriculture’s dairy checkoff program, which siphons up to $4,000 from her bottom line each year to fund a network of nonprofit organizations tasked with promoting the dairy industry through advertisements and the development of new products.

See there is a check off all through the industry from soybeans to beef. The crooks in Congress though set it up so that small time researchers or ad agencies can never get their hands on this money being paid by farmers and ranchers.

I will reveal to you a real experience I had. I contacted the Soybean Farmers union and they were most friendly and helpful, as I had a project in the works in using soy oil as a base grease for some advanced lubrication formulas I developed. I could not apply to the Soybean Farmers though. Instead Congress set up a gate keeper in Kansas who was a complete ASSHOLE. When I attempted to apply for development funds to expand to production testing, this prick instead wanted to know my formulas, as in if I sent in my work, it was no longer under my control, and was going to be stolen by this asshole.
I declined, and then he got testy with me and insultive.

That is what is going on in agriculture in all the small operations have been obliterated for agri business which is replacing them with those goddamn abusive Mexican vermin who beat on cows and chickens or piss on your apples and shit on your spinach.

It is the same in any government program in it is all geared to the connected universities or companies who can afford the paperwork and it excludes all development and production by design.

It is all a scam, but as is typical, unless it is happening in the northeast the rest of America can die of starvation.

I told you Donald John was taking over the California Dairy Industry, and this is all part of it. What will happen in the east is the conglomerates will drive out the small farmers in these markets and then like in California and elsewhere these 5000 dairy barn torture chambers using Mexican labor which beats and fucks animals will replace these Americans.  Then when that happens the price of milk will magically spike, just like it did with eggs. The problem with 3 dollar eggs though is no one will buy the damn things, and they have to sell the old little eggs to Americans for  88 cents again while the big eggs apparently all go to China as finding large eggs in the market is a thing of the past and some asshole is getting them, just like American lumber is all going to Asia.

This is Trump America, the corporates get the money while the rugged individuals are being wiped out, and that is Sonny Prudue or whatever that asshole Ag Secretary's name is.

They have also stopped dairy shipments and milking operations and sent cows to other ... New Mexico Dairy Farm Fires All Its Workers After Cow Abuse Is ...

Disturbing video appears to show abuse of cows at Florida ...

— A disturbing video appears to show workers at a dairy farm in Florida abusing cows and ... and milkers beat, stab and torment dairy cows with steel ...