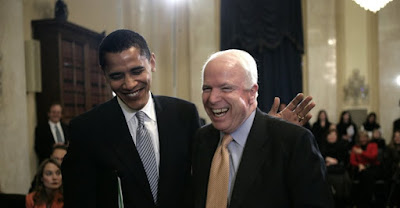 
McCaingate is now an official reality, where John the hero McCain moved as Richard Nixon did, in advocating the IRS to be unleashed on his political contenders. If you want to know why John the hero McCain was snuffing around the Obama armpit of Nazis in Ukraine, Obama's ISIS terrorists in Syria, Obama's al Qaeda in Libya mass murdering the Khadaffi Government, it is because a deal had been worked out where McCain was the Pasty White President to Obama's Designer Negroid Occupancy. McCain was running the terror network of Obama and Obama was terrorizing Americans for John McCain. 
The colluding of using a Government Agendy to destroy Americans is a crime, no different than if McCain hired an arsonist to burn down a home of someone who disagreed with him. It is time for a Special Counsel to be appointed to investigate John McCain, and in life or death, try John McCain for high  crimes against America.