All in a Days Shooting 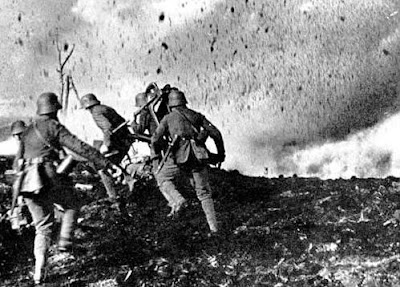 
The German Landsers of World War II on the Eastern Front, were never equipped with the heavy weaponry of their communist counterparts. For the Landser, it was a matter of rifles in the MP 40 submachine gun or the 98 k Mauser bolt action, grenades and demolition packs.

For the Scout whose vocation it was to range to the Russian lines gathering intelligence and shooting communists to demoralize them, what they faced were a myriad of FDR and Stalin weaponry. There were the snipers, the infantry, the machinegunners, and into that came the heavy weapons of mortars and the gem of the Soviet military, Stalin's Organ.

When novice Marksmen asked  how to survive these things, the survivors would state to always choose your hide with an avenue of escape, because once the Soviets caught a Marksman out in no man's land the first warning was usually the thump of the firing if the speed of sound  moved faster than the whistling missile, and then what followed was if a Landser was caught in the open was the Hassensprung or Rabbit Leap, as the Landser zigzagged for his life.
The Soldier always had to move with the mortars as  sooner than later the communists would get the range and pepper the location bringing certain death.

It was Stalin's Organ though which brought the fires of hell dread to Landsers, as the Russians had a truck towed rocket launcher which would literally scream with every salvo.  This battery could turn a football field into a literal hell of sulfur churned up scorched earth.
The only answer to survival was to find a hole, ram your ass into it and pray you somehow had a miracle and survived.

By 1944 AD in the year of our Lord, the Landsers appearing on the front were issued Beochtung, or Observation rounds of special make in named the B Patrone or Beochtung Cartridge, to the Russian PZ exploding shell.

The Geneva Convention banned such weapons against humans, but the communists had made a point of it to use it against the German Soldiers as soon as they discovered their effect of an exploding bullet doing a John F  Kennedy in Dallas  effect on every German they hit.
The civilized world in London and Washington DC, were well aware of what their communist allies were engaged in, in war crimes and crimes against humanity, but nothing was said in the all smiles of Churchill and FDR with Stalin. The Germans only alternative was to issue the same ammunition to use agains the Russians, as their Marksman had soon discovered the red capped cartridges in captured Russian lines and were using them with effect from 1943 AD in the year of our Lord. For the record, when it was an issue of must kill shots, the German Marksmen who were armed with Soviet Nagant rifles reached for the Russian PZ round.

That was the war which German Soldiers were experiencing, all before the forced labor camps, which were propaganda renamed as death camps. The reason they became death camps is because American, British and Russian bombers blew up the supply trains and convoys to these work camps so the inmates were starving and no medicines could reach them, as they carried the typhus plague. It is one of the fact of history that Albert Speer created for Adolf Hitler the labor camps, just as every empire had labor camps from Rome to Babylon to serve production, but it was the Russians, British and Americans who transformed them deliberately into death camps, and then covered up another atrocity by blaming the Germans.

There are those who still grasp at the lies that the Germans deserved everything done to them, and all the smearing of them for the past generations, but in the real history one discovers that the Germans were responding to past atrocities for the genocide in beginning World War II, after they were pushed into World War I, and once in both wars, they were attacked criminally.

The Landsers of the Eastern Front responded to Soviet atrocities which thee Americans, English and French were all well aware of.