I am posting this without permission, but I was over at Bugsy's today our old neighbor and he said to me,
"LC, you got time, I want to show you something."

I always have time for adventures, so off he led me to the cattle lot and through gaits he built. Yes I asked him, "Bugsy, you got a pipe bender?", and he said, "You just need a jack and they bend," and he pointed me to some pipes that the Jolly Green Giant could reach and I was supposed to figure out how he was turning metal pipe into gates.

That is why I am telling you this, is because Bugsy's family are all geniuses, but it is the kind of genius as his wife says, which is not in a book. You can give him a book with words and he won't make heads or tails out of it, but he can figure things out that just astonishes me.
His dad was the best mechanic and welder I ever knew. He was telling me that once he took apart an M in the middle of the field in the rear end and fixed it out in the elements as that is where it broke down.
His other brother is a mechanical whiz like the dad, but Bugs is the welder and designer, and if I was amazed at something it was top notch, as I told him his stuff belonged in a magazine. 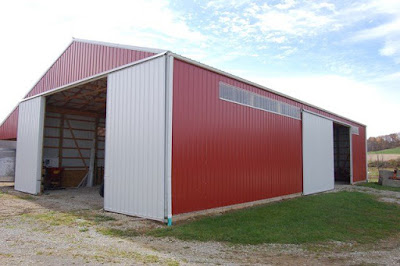 So he says to me, "I was thinking about building a shed as I had an open space here, so I got to figuring and was thinking this and that, and decided to leave one end open, and then I put in post to form a rectangle within the pole shed where I could unroll round bales in for the cows to eat, as I wanted something when it blizzards". 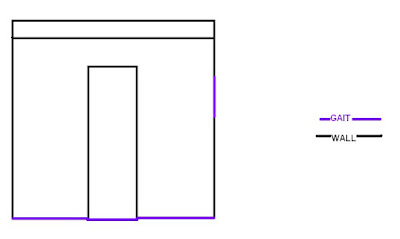 I was absolutely envious, as along  the walls he had lined it with bridge plank. He could have a herd of bulls fighting in there and they would bounce off. When Bugs builds something you could fly it to the moon and back through a meteor storm and the comets would bounce off. 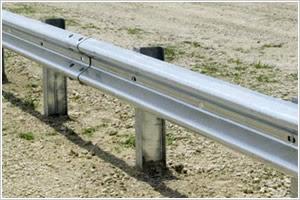 So I asked him what that stuff was he had making the rectangle for the hay, and he said, "That is highway guard rail I got. My son was hauling stuff for a neighbor and the neighbor had what he wanted, and I wanted this 20 foot stuff, and he said, just to take it as he had it all that he wanted". 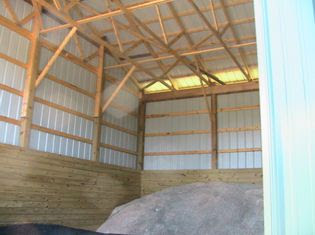 He had that bolted with what looked like inch bolts, and then he pointed out the back of the barn where he had put bridge plank, double bolted together about 3 feet off the ground so the baby calves can get under it and not get stepped on by the cows.
Then he said, "Those baby calves can get in this central alley way and they play in here too. The old stuff they don't eat, I just put it in the outer area for bedding.

I was looking at his feed set up, and he said, "I just welded some chain on the guard rails, a pipe in the middle and it moves, because that guard  rail is a little brittle, and it all worked out as I put the generator on the H tractor, hooked up the welder and got to it.".

This is the best cattle set up I have ever seen. No one has ever come up with anything like this and it is as I have said that Bugs is a genius. I looked at his other stuff and it was all laid out perfect as everything flowed. As he said, "Gardening is not my thing, so I keep cattle around and I like doing that."

This all started as I had asked him how his calving had turned out in the snowstorms, and he said, it was just fine, and showed me what he had built.

This is an amazing cattle set up, for his around 30 head of cattle. They stay dry, are well fed, can get out for water, and are protected from the wind. He said that snow blows in about 8 feet in the front, but he doesn't care about that. The only thing that would help with that would be wings on the front in a door he could shut instead of a gate, but a little snow does not help and on  sultry 90 degree day it was really nice in that pole shed with around 20 head of cows milling about in there with calves.

He uses a skid steer for the work in feeding and he just loves it, and it fits the set up in the barn perfectly he designed. As I have stated not many things shut me up and amaze me, but this creation does. Bugs never finished high school, as I stated words do not mean a great deal, but he is a genius in all the designs and abilities he has. He said he misses his dad, as everyone does, but he could come up with something and then his dad would have ideas and then both of them would get to building things.
I found an old snowblower that his dad had built back in the 1950's for a tractor sitting in the junk. It literally was a perfect design and he came up with it before those things were even known of.

When we get that big donation, that is what I am going to build, just as Bugs designed it as the thing works, and I am still amazed to the ideas he had for a calf stall in back where they could lay unmolested.

Do I have a few ideas which might work for me, yes I do, but they will probably not be better, and certainly would cost more, but as he said he ran this thing for a year which meant 30 cows were pounding on it hard with calves bouncing around in it, and there was not one bit of damage to it, that is what genius is, as Bugs says, "It gets expensive making mistakes".

I appreciate genius like this as he gets it right the first time on a big project like this, worked out what he wanted and it all worked out. That is what Inspiration and Genius is and Bugs has it.