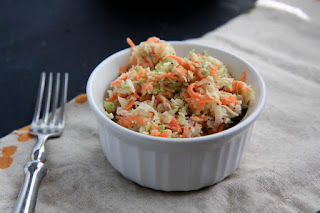 This is another Lame Cherry recipe and of course it is the best of the best in cuisine.


As I am poor, I can not afford poppy seeds for poppy seed salad dressing on cole slaw. Necessity means I have to come up with things besides a mayo recipe with sugar.

The following is my Pepper Seed Dressing.

This is for 3 people. TL hates cole slaw in most cases but will eat this.

As stated I do not measure things, so you grate enough cabbage for 3 or 4 people.

Wisk this up so it looks like an emulsion.

Now take your large crack black pepper and shake it on your grated cabbage to what you think you will like. Stir in the dressing and let it sit in the fridge for a few minutes to chill, and voila you got a Lame Cherry original.


If you are feeling original, you can do my variation on this, in you replace the APC with lemon juice and replace the black pepper with about a half teaspoon of grated ginger.

I hate salads, but in a way I do like cole slaw as it likes me.  I have another dressing which I was Inspired by, but that one I am not going to make that public. I imagine I could start an entire salad line of dressings which taste like nothing restaurants or groceries produce.

I guess it is time to wrap this up.