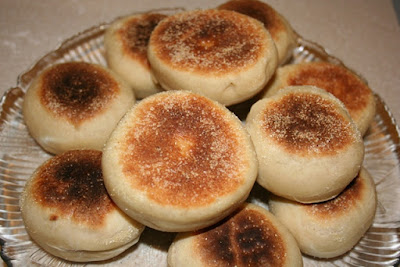 I live in fear.

Yes TL informed me that TL does not like English Muffins.

I live in fear.


So being tired of breakfast casseroles and not being pleased with most fare as it was too long of winter,  I arose on the Sabbath and did this:


That is the basic English Muffin recipe. Milk has a natural enzyme in it to keep it from thickening. Hence why acid is added to milk to curdle it, as God designed milk to not turn into yogurt in a calves mouth. But for wheat, milk is a protein in the whey which works to weaken the bonds of the gluten in the grain. Hence in bread breaking where a chef needs the elasticity, milk will offset the purposes of rising in yeast in trapping bubbles and the necessary clinging nature of dough. So  that is why one scalds the milk.

I rolled this out  to about 1 inch thickness and used my doughnut cutter which I would like a larger one for these muffins as are common in the store. I then put them into cornmeal and placed them in a warm oven to raise, or activate the yeast, until chores were done which is about an hour.
Oh if you can get a tuna size can, I read that will cut out to about the right size too. Just takes care to get them out as the bottom of the can is finger proof.

You can cook these two ways. The  proper way is to use a paper towel and wipe oil  into a iron skillet or two, as I have two, it was two and you heat the pan to sizzle and then turn it down to medium, as you do not want to burn these muffins.
Check them to make  sure, but you want a brown like in the store kind. Odds are you will burn them but that is what is scary about it, but you will get the hang of it. Just do not wander off as it is around 7 minutes or so to a side.
Be careful in not burning your finger in checking them as I did. These will not have the huge holes in them like the grocery, but be a cross between holes and baking powder biscuit.

You can also bake these, and turn them when slightly brown on one side, and finish. They will be more pretty, but lack the necessary cringe of real English Muffins.
This make about a dozen muffins.

When done to your satisfaction, I fry eggs hard, place a half slice of cold ham, some Colby cheese, and a good jelly with one muffin side buttered. I salt and pepper, and that is breakfast which will stick with you.  You will be surprised how filling these English things will be.

I feared making these things as I have  trouble with donuts in a pan, but they fried up on the stove very nice, as my Gram used to make fry bread, as when an old biddy from Anglo Saxon stock had been out in the fields all day, you did not have time to bake bread, so it was fry bread to feed the children she detested.
I also feared TL, but TL upon eating them, smiled and said TL liked them......and it was honest and not just making me feel good about making something TL did not like.

This is much better than stores as it is fresh and everyone should try them as they are easy, and all you need to do is pop them in the toaster once halved and you have the same breakfast.

Think that is about it for Anglo Cherry Muffins. Just remember not to get the fire too hot or they go Pompey volcano in burning. Have to have a hole in the tuna can to even out the air pressure to help get the cut muffin out. 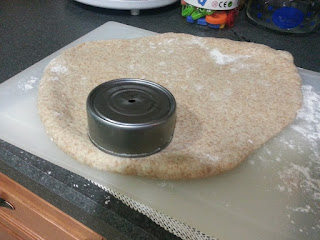