To Murder the Wounded with Bombs and Knives 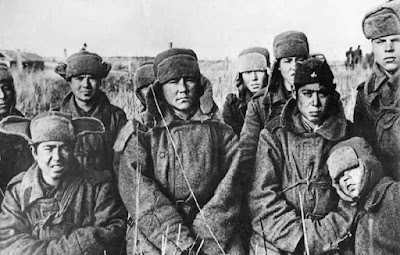 A group of German medics were discovered in World War II on the Russian Front. This is their story.


They had accomplished setting up an aid station for the German wounded and had literally more business than they would ever want as limbs were amputated, the death were handed over to grim reaper and piles of flesh filled a pit behind this 'hospital'.

Into this one day as the doctor, as there was only one physician there to treat the wounded, was inside, that two of his orderlies noticed a group of communists appear in uniforms who were Mongols. They raised their hands in surrender, and tried to explain that they were unarmed as this was a hospital and their firearms were all stacked outside the door.

To this the Mongol leader screamed a variety of things which mostly had to do with pigs and Germans, and then a rifle butt smashed a medics face in, and he fell to the ground as his answers did not please the leader, who then continued kicking the screaming man.
To progress this the communist produced a machine pistol and shot the beaten man in the chest.

It was at this point the doctor appeared with another medic, whereupon the communists charged them, shoved guns into them and started screaming orders at them in Mongol. There was a patient on the operating table. Another Mongol produced a knife and spat out more obsenities and plunged his knife into the chest of the man three times, providing a cure.

The Germans by this time understood that what awaited all of them was not going to mean life. The doctor pleaded for the wounded men's lives, but the Sargeant waved his hand and ordered all of their throats to be slit like sheep.
In a few minutes the entire area was filled with the scent of warm blood and the gasping gurgles of dozens of slit throats.
The knives were quite sharp as these must have been farmers from the east as they almost cut the heads off of several of the men.

The doctor being human and horrified turned pale at the ghastly sight. For this he was deemed weak and a rifle butt smashed his nose and broke it, knocking him to his knees. The blood splattered on the Sargents boots, which really infuriated the communist who then smashed the doctors skull killing him with the same rifle.

One of the ambulance men left was pulled forward and the bloody rifle was wiped on his uniform.

The pillaging then began in earnest by the communists. It was ascertained by the conversation with their guard who was complaining in losing out on the looting, that the Sargent was going to torture all of them to make them talk before he slit their throats. It was understood enough by the Germans of what was about to happen, and as the looting reached a fevered pitch, and their guard was distracted, a plan was enacted in one of them pulled a boot knife, dragged the Mongol behined the tent and sank the knife into his kidney. The pain made him collapse. The other medics then bolted, but the Mongol began to moan and with that the communists opened fire killing the Soldier with the knife and hitting others.

As they had to jump over the human waste pit from operations, one fell inside and had to be helped out, but was shot in the back by the Mongols in the process. They ran for their lives in the four survivors and for 2 days never stopped running until they reached the German lines.

None of these events were isolated as the Russians made it a practice of bombing hospitals and trains full of wounded. In this case, it was a bit more intimate instead of bombs it was knives and rifle butts murdering the wounded and unarmed medics.

The horror of this does not need to be elaborated on. These war criminals were glorified by Stalin and the Soviets and have yet to be made to pay for their crimes against humanity. Never forget, the Germans have paid the price in Nuremberg and 11 million dead in allied prisoner of war camps after the war. They have paid for several generations in being smeared as the worst people on the planet. The fact is German forced labor camps where people died after being sold by the elder Jews, due to the allies bombing supply trains to these camps, is nothing compared to the Soviet mass murder of wounded and medical people, which the Americans, British and French covered up for all of these generations.