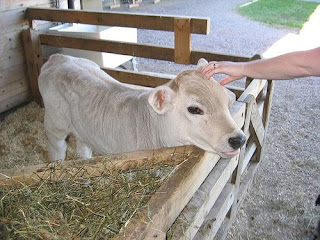 I sit here chastised in a milk cow breed did not even come to mind in my dissertation on Daisy breeds.  As I digress in this, TL had Daisy on rope today and she is getting to be a huge cow. The Jersey have some genetics in them which are remarkable.

Now for why Brown Swiss did not come to mind, even though  they are some of the most gentle of breeds for milking. I was thinking about basics in people who are not in the dairy business, meaning their hands are not meant to bend pliers, meaning major milk producing breeds like the infamous Holstein will produce gallons of milk.
Our beloved old milk cow, Leona, was a little cross bred thing with a Hereford. She still would with a calf on her, and 3 tits working, produce for us 5 quarts or an ice cream pail of milk a morning. Some Holsteins will produce 5 gallons. The Brown Swiss is a contender for that amount of milk, meaning milking twice a day by hand to make people gasp of what real work is like, or a 1500 dollar single milking machine which will need to be cleaned daily.
That kind of milk production is too much for one calf, so calves at 300 dollars will need to be bought or the milk dumped. The old timers used to feed it to pigs, but that is another chore and it sort of gets in the way of the serenity of having a pet cow that you want to enjoy and not become something you dread.

I am trying to get out from milking these two Hereford heifers, as it take a half hour every morning and I need a rest. Hannah kicked at me, or a fly the other day and things went flying. Chit happens and you always have to be careful. Daisy has her own mind in being docile, but big animals are dangerous no matter how nice they are.

The reason I did not mention the Swiss was the same with the Holstein in too much milk. If people could get some Hereford crossed with a Jersey, Swiss, Ayrshire etc. it might be a better way to go. Just know Herefords so prolapse sometimes, meaning their they push their womb out when calving. All breeds have problems and I lost Guernsey Hereford cross which we had to eat. To the point in this, I would never recommend an Angus cross as Angus got their size from a cow called Blackbird, which was a black Holstein cow, and while Angus have small bags, if you cross them with Herefords or other breeds, they get big ass Holstein type bags. We have a nice little cow who had an Angus father, and her bag is huge, while her mother's bag is not that large.

I know people get set on things. I just wanted a Jersey and the Mulberry Lady wanted one too she told me, so I tend to focus on Jerseys and those richer milk producing English breeds. Brown Swiss are just too much cow for most milk situations, as I know for most people the idea of having a milk cow is really romantic, and then they get grass shit tail in their face while milking or that hard after birth tail whapping them like a club, get cow kicked so the milk bucket goes flying with all their work, and it is a hot day with flies or a cold day with cracked hands and the cow ends up going down the road.
I just was trying to find  the less work fit for people who are not looking to be hostage to a cow.

My uncle had a Brown Swiss and she was pretty. The idiot had a cream separator set up to rich and his cream was like butter. That didn't last long as he was always a lazy bastard who never did pay me for pitching hog shit. I would love to have a pet cow of each breed. I like them and Baby Moo is quite a character in having Daisy size attitude at 8 weeks of age. At this point I like her more than a dog and more than a cat.  She doesn't slobber and she doesn't scratch. She just exhale allot in sighs and lays down at our feet for a nap. 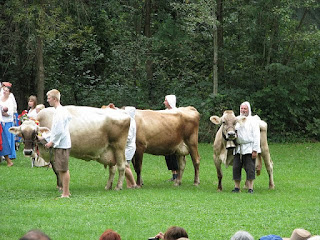