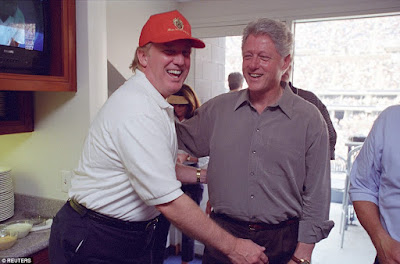 In examining the Liberty Daily headlines, something jumped out at me and see if you see it as I will weed out the rubbish for what matters.


Do you see it? Does it not sort of look like American Whiteness is joining forces against Obama Britisher Blackness?

Things just do not happen by accident. For Mark Penn to be trashing Obama on the left, and for Bill "that bright boy Obama" Clinton to be telling the world that the press covered up Obama's crimes because they liked his Designer Negro skin tone, and Donald John to be quoting the facts, indicates that something has been worked out between Bill Clinton and Donald Trump. I am not saying this means Hamrod will be President, but I am indicating to you that there appears an alliance has formed and what is being the target for all of this crime is Birther Hussein Obama, and his cast of British colluders in the Obama regime.

Think of it this way, the Clinton's do the heavy work in hammering Obama's skin tone, on the left, and Trump pounds Mueller on the right, as the DIA continues to roll on and roll this up. The Trump people have already said they will fight Mueller in court and wipe him out. This is transitioning to the Obama criminals who were looking to work for Hamrod. All the Clinton's have to do is throw their hands up and say, "Hey we never knew a thing about this", and it settles on the Obama legacy group of scoundrels.

Bill Clinton going after Obama on race is only helping to emancipate Blacks from the Obama plantation, and as they are not voting for Hamrod, that means they are Kayne West coming home to the new Trump party.

This blog informed all of you that the one salvation Donald Trump had was criminalizing Birther Hussein. That is fast approaching a reality and Donald John with the DIA can level the Animal Crackers like John Brennan and Robert Mueller, but it will take the Clinton's to cut the tie that binds, Obama to Blacks and the Puppy Press.

I have absolutely no problem in this phase of sick old Hillary skating as White Democrats lynch image Obama to regain the party and end this community organized communism.


Then again Bill Clinton is the smart one in the marriage, as Hillary wears overcoats in summer and whines, Bill is cutting his own deal as he is playing this to wipe out Obama and regain control over the Whitey Party and stoke the sore spot of impeachment on Trump and Bill got impeached for having his cock sucked by a girl in the Oval O.

It must be a hell for an old man like Bill Clinton in having to fight all fronts, because his old wife is a dead weight and losing ground.

Bill Clinton did not hold back when he was asked about President Trump on CBS Sunday morning.

Bill Clinton admits he and Hamrod can not get elected. So the Trump bashing is a cover.  Of course Bill is rapist furious yet as he got the wood put to him for what Trump was up to. He leaves himself open though as Bill's mum was a whore party girl in Virginia Kelly who birthed a bastard Rockefeller named Bill.
Clinton has to bash Trump to appeal to the radicals, but his Mark Penn is out there doing it for what is left of the Blue Dogs that all voted for Trump.

There is one common enemy in this and that is the Obama community organized deep state which invaded America like a cancerous venereal disease and Bill Clinton just the vaccine for it.