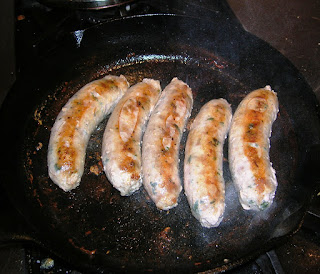 Another Set of Bangers Gone Bust

I am convinced in my human observations of psychosis that a number of people die cooking their last meal.  I believe that this so traumatizes the family who are stuck packing up the dead belongings and their being lazy and only interested in the money, that this affords a glimpse of the dead.

Take like today, a Revereware 10 inch frying pan. As I have a set of the small, medium and large, I was not exactly interested in another one, but TL pointed it out and informed me it had a cover, which I did not have, so it was acquired for a 1.50.

It seemed like a good pan until we got it home, when TL said, "Look at that electric tape wrapped around the handle". I checked it out and someone had stripped the front screw, so hence the "fix".

It was though what Mom said in, "I know what they cooked last in that pan, sausage", that I made out the odd pattern that was in this pan of sausage links.
So I washed it up thinking it was a stain, but there was not any mark, in it came out clean. Hence, we have before us another example of someone was cooking their last meal and they went tits up. Usually the bottoms are scorched or the interiors black or rainbow color, which will wash out if you know what to do, but this seems to me to be a bird who put their links in a pan, perhaps to thaw out in a gas warmed pilot oven, and then keeled over. That would explain the non charring and the patterns in the pan.

What requires explanation though is the above in why in hell some kid can not wash a pan of their parents before it is thrown into the goodwill store. That kind of thing is not uncommon. It is interesting though in most kids will at least wash a burned pan before they chuck it, but this one was a reality of they just chucked the sausages which had exuded their grease and tossed it all into the bin, along with the dirty pan cover which had touched the sausages.

I have heard of people with heart conditions hitting the crapper before they keeled over, but this is something different in people seem to be getting ready to eat a great deal of the time when they die. It could be a fact that the clock hits meals three times a day and that is around an hour and a half in day, so one would get a percentage of people who have zero sign of going tits up, and just die while the meal is being prepared.

It seems a peaceful ending in that, you are hungry and die, with no warning signs. It does seem though numbers of these geezers are into hot pans with meat in them, which again is a fitting tribute as no one wants to die in their tofu.

Just another one of the Lame Cherry observations in the land of the poor as I notice things in other people's discards in matter anti matter exclusives.