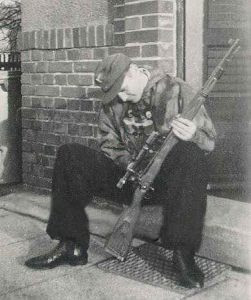 Deep in the recesses of military history of the Russian Front of World War II, there is an interesting footnote which would be lost was it not for the memoirs of an Austrian Marksman of the Gerbirgjagers or Mountain Troops.

It was in the vicinity of Bakalovo that an event took place after heavy fighting which is a teaching lesson in the art of sniping. What is of interest is the Germans actually taught the Russians how to snipe and as the Soviet's did not have a great deal of resources for heavy equipment, they focused on sniping. The Soviets were lethal at this in murdering piles of German officers in the opening years of the war, but by 1943 the Reich Marksmen were providing an even more effective lethal remedy on the Russians. This would prevail to the end of he war as Germany lost her heavy weapon production and had to rely on Marksmen to attempt to stem the Soviet raping hordes entering Europe.

A group of Landsers in a reserve unit was on the move, and suddenly came under intense and precise fire. Eleven of them were dead from head  or chest wounds fire from the forest, and the line immediately declared they were dealing with snipers.
The Germans had no heavy weapons, and machine gun fire was worthless for all the branches and trees, so remedy was to call up a Marksman, and in this case it was Joseph Allerberger from Austria.
The commander Oberst Lorch issued the remedy that Allerberger was to arrive at the scene and take on an entire Soviet company of snipers hidden in the forest.

Allerberger arrived from II Battalion at the abandoned farm buildings. He was apprised of the situation and took in the field of battle. The tree line was 300 meters away, so he had to get closer. That meant crawling to a position 100 meters forward to some bushes.
Allerberger was a genius at camouflage as he had created an umbrella of sticks, which only had a small opening in it to peer through, and from that he observed the enemy lines. It was lightweight, portable and in all his work, it never gave away his position.

He also  pioneered the ammo sack head decoy. He would take an ammo sack, draw a face on it, put a helmet on it and putting it all on a stick, have Soldiers raise them when he was ready to draw enemy fire, in order to ascertain the enemy's position.
On cue the decoys were raised, and the communists fired at the dummy heads.

The Marksman had already concluded these snipers were shooting from tree tops which was a complete violation of sniping as  once up a tree there was not any way of retreating and that meant death once your position was located. The premier rule in any activity is based on three points:

Do not be seen.
Do not give away your position.
Do not choose a position where there is not an escape route.


When the Russians fired on the decoys, they violated the other two doctrines of sniping after not leaving themselves an escape  route.

Once again the 19 year old  Austrian had concocted a brilliant plan. He placed the decoys in a new position. Set himself up off to the side from which to fire from, and concealed several machine guns which would open up on the Russian positions after they fired at the Germans.

It was all German efficient, as the decoys would draw fire, Allerberger would signal for the machine gun salvo to erupt after he located the Russian positions in order to disguise his own firing, and one by one the communists fell from the trees like bags of wet cement.
After each firing, the Austrian would change position as would  the machine guns and it would begin again.

In under an hour, Joseph Allerberger in his duel with a company of Russian snipers, shot 18 of them dead, and then all went quiet.
Allerberger had deemed this group inexperienced in  they had concentrated on head shots and were up in trees, so he deemed he had a chance at success, and he was most successful.

As the firing from the communists ceased,  the Landsers moved on the position with the Marksman and a machine gunner providing cover. When the Landsers arrived at the trees, they waved over Allerberger who was still leery of the situation, but soon discovered he had shot 18 communist women snipers. It had been an entire company of female snipers.

The Austrian had performed again one of thee most amazing feats of warfare, in engaging alone, from a pinned down position, an entire company of trained snipers who had already killed a number of German infantry, and had survived the prosecute the war further in protecting the Landsers.

As the Lame Cherry has stated, I have zero respect for these modern long range snipers as killing even terrorists for records is murder. The Marksman is a completely different art form, just as Carlos Hathcock hunting from his Fire Base in Vietnam was a completely different situation than the army dumping off snipers from a helicopter to shoot people. Some may say dead is dead in war, but they Court Martial some for one kind of dead and award others for another kind of dead like Sargent York.

Joseph Allerberger along with the German Marksmen were shooting most of  their inventory at 100 to 300 meters. There was not any mile shots as the weapons they were using could  not shoot that far. Should a Marksman utilize every advantage as in night vision and long range weapons? By all means as the purpose is survival, but that ends  when glory shots  appear in long range records and canoeing skulls in.

That is why Obergfreiter Joseph Allerberger is featured here for his ability as a warrior without becoming a murderer. This Austrian faced a company of communist snipers which numbered at least 18 and could have been 24. It is probable that he killed thee entire contingent and the officer slipped away.

That is a remarkable and heroic feat in war.