Christophobia at the Red Hen in Hate Crimes 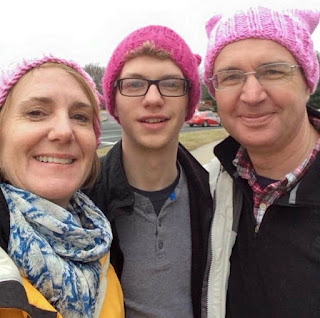 The Grinning Faces of Hate

Given the choice, Stephanie Wilkinson said she would kick White House Press Secretary Sarah Sanders out of her restaurant again.


I am fascinated by the coward pussycap weaver, Stephanie Wilkinson in first she hid who she was and now it turns out she just outed her homosexual employees in being guilty of violating federal laws in hate crimes, by "voting" to engage in discrimination against a Christian woman.


Wilkinson told the Washington Post that some of her LGBT employees were apparently triggered by the presence of a Trump administration official and suffered massive microaggressions.
The Post reported that staffers “knew Sanders had defended Trump’s desire to bar transgender people from the military.”
Wilkinson said she gave staff members the final decision on whether or not to kick out the Sanders family.
“They said, yes,” she told the newspaper.

Legally Wilkinson has provided damning evidence of this criminal event. There is not any micro or maximum aggression under the law. Aggression is ASSAULT and in a public statement by the Washington Post noted for recording statements against Judge Roy Moore, has recorded testimony, like the newspaper accounts which Robert Mueller and the FBI used to go after Donald Trump, that the homosexuals at the Red Hen engaged in a criminal conspiracy against Sarah Huckabee Sanders and her family.

It is time for Jeff Sessions to form a Grand Jury and indict all of these criminals guilty of Christophobe, the hate of Christians based on race.


It is time to indict this Christian hating group on federal crimes and time to shut down this den of iniquity.