Apparently noxious Marxism has gone pogrom in the United States as a second innocent woman was accosted in public at a restaurant, in being denied service for being an American.

Sarah Sanders ✔ @PressSec
Last night I was told by the owner of Red Hen in Lexington, VA to leave because I work for @POTUS and I politely left. Her actions say far more about her than about me. I always do my best to treat people, including those I disagree with, respectfully and will continue to do so

While the owner of the Red Hen is apparently to cowardly to go public, the Lexington Red Hen site has pages pointing to those people who sponsor and work at this bigoted establishment. 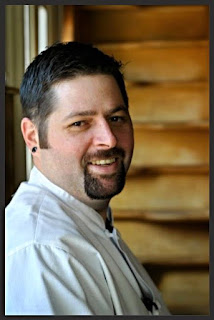 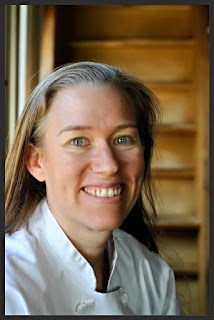 
Then there are the local high end producers who are making money associating with this anti American establishment which assaulted Sarah Huckabee Sanders.

We work with amazing local producers.

Maybe Sean Homo Hannity should start asking the above businesses if they agree with the mistreatment of Americans as long as there is a profit in it for them.

It was only one waiter in need of their job who called attention to this first, in he had to go through the work of seating the Sander's party, take their orders for 2 minutes, and then the owner destroyed that chance for the waiter to make a living. 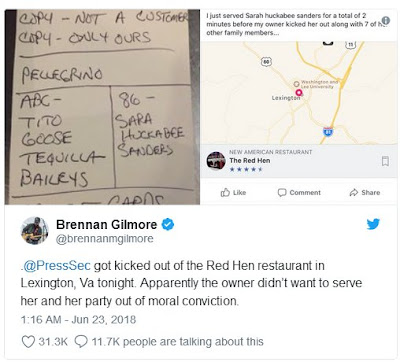 The tips in this would have been for a party of 8 at a high end restaurant would have been 100 dollars. All money this working person was cheated out of on a Friday night when working people make most of their wages for a week. As the tips are usually combined, this cheated all of the waiters and waitresses out of that money.

For those on the left who always say NEVER AGAIN from Nazi Germany and there are those who wonder why the Germans never stood up to the Nazi's, the reality is the above chefs are not going to quit their jobs, not going to stop doing business with the Red Hen, because that is the way it goes, and the cruel mockery of Nuremberg trials in blaming people for supporting Nazism in jailing and hanging them, because here it is in America and the exact same thuggery is on display as leftists cheer and innocent women are treated like criminals for enforcing United States Laws.

That is what American "principles" look like in not one person associated with this bigotry in Virginia is going to quit their job or stop selling their products, because what does an innocent Christian like Sarah Sanders and her family matter..........as all of these people with the Red Hen were just taking orders.


It is past time for that do nothing AG Jeff Sessions to launch a full civil rights complaints against these businesses and stalkers, with fines and jail time, as Bush, Clinton, Bush and Obama could not drop enough lawsuits on bigots and racists in their regimes.