Cowards Kill As Many Brave Men 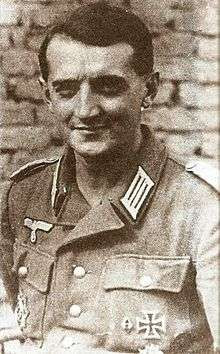 
This is the story of Captain Max Kloß or Kloss in the incidents of war in who cowards kill brave men.

It all begins like all stories in war, in this one on the Russian Front as the Germans stubbornly laid down withdrawal fire, making the communist bleed and die for every inch of ground. The problem was in the worst and best of situations, cowards appear in war.

Kloß was moving to another new line and he had left orders for a tunnel to be blown to slow down the Soviets after a flank group of pioneers or engineers had made it through. Instead what took place was another engineer left to blow the tunnel, blew the tunnel as II Battalion exited the tunnel.
Soon enough two surviving engineers appeared out of the tunnel, announcing the tunnel blew just as they entered it. They survived, the rest were blown up.

Captain Kloß was carrying this as his Landsers approached a position in the line, exhausted and not in any mood for rear line commandos. It was at this that they were challenged in demanding a password. One of the Landsers replied, 'Password? Where are we going to get a password arsehole!" and with that he continued on to his amazed comrades view. His last words were, "Stick your password up your cock!"

Instantly a machine gun erupted and killed the Landser as the other Landsers dove for cover and started screaming for the shooting to stop. Captain Kloß crawled forward in not any mood for any of this and began screaming for the gunner to stop firing in calling him an arsehole too.
Soon a lieutenant behind the gunner was asking questions and Kloß was answering  in even more caustic responses and was told to come forward.
Kloß with his gun extended before him walked forward and then let loose. He started screaming "Du verdammter Drecksack, du hast einen Kameraden erschossen! Ich werde dir eine Kugel in den Kopf schießen! translated, "You fucking dirtbag, you shot a comrade! I'll put a bullet through your head!"

Kloß was just getting started and was working himself into something beyond a fury and a short time later with a loud scream, he pulled out his pistol and emptied it into the chest of the machine gunning coward. The Landsers pounced on him immediately, brought him to the ground and slapped him to get him back to his senses.
The lieutenant was understanding and with those around only the witnesses, no one said a word and it was officially an event where two infantry died for Greater Germany.

In most instances a coward never receives their end as Captain Kloß provided in a final solution. Kloß was compassionate as cowards have to live with that for the rest of their miserable days, which are usually drunk or stoned, until they put a bullet in their heads back in civilization.

Captain Kloß was one of the finest and most compassionate of officers as the majority of the Austrian Gebrigsjagers of the Reich. They were given an insane task and demanded thee impossible from their men as they were demanded the impossible by the OKH and Berlin.