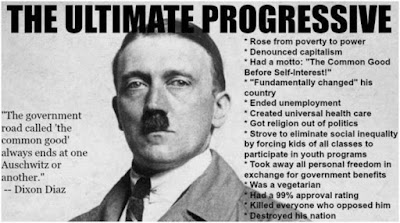 Ignorance is something which is the greatest threat to reason and one of the greatest examples are the endless comparisons of  Donald Trump with Adolf Hitler, with the endless charges of Nazism. I will examine this for it's reality to lay waste to the diatribes which permeate this sphere and pollute the body politic.

I actually would recommend each of you to read Mien Kampf, as it is the finest political examination in human history. Adolf Hitler was a political genius, and he understood the narrow and broad of human governance. What you would discover is thee exact overthrow of America which you are being wasted by, was written of by Adolf Hitler in exact details, as he understood political intrigue of the Marxist left.

So is it legitimate to compare Donald Trump to Adolf Hitler? Not in the least. Hitler was a political mastermind who was actually sabotaged by the communists in his government, led by agent Martin Bormann.  Donald Trump has the same treachery in his Junta, but Donald Trump is not the same shade of Adolf Hitler in political genius. Donald Trump is accomplished in running WWE events as his policy, but he is a DIA conduit and it is their socialist orb which promotes and accomplishes policies for the DIA and it's orb.

Donald Trump is led by the DIA. The DIA's interest are to promote the Nazi conglomerates. What I explain by this is, National Socialism Corporations which rule America, which Birther Hussein Obama implemented in his overthrow of thee American system in giving complete control to these conglomerates to regulate America. That is Nazism by the state, and was implemented by Dwight Eisenhower after the hodgepodge of socialism of Woodrow Wilson and Franklin Roosevelt.

Adolf Hitler managed Germany by the Gauleiters who were the real controlling political and societal force in these regional political fiefdoms. That is what is missed in Heir Hitler, in he chose National Socialism as the best platform of his objectives. Adolf Hitler never was a Nazi, but only utilized the movement.

Donald Trump is not a National Socialist, but he has embraced the Jewish financial rapine, because that is what the DIA needs to manage the economy, to keep this same of looting America going, so the military does not at this moment need to start nuking Conservative States in revolt.

As for Donald Trump being evil like Adolf Hitler. Adolf Hitler was not an evil person no matter what the propaganda lies about him with. Adolf Hitler was as nationalist as Teddy Roosevelt, engaged in a war to protect his nation as Abraham Lincoln did, against communists, and if he had been successful, Europe would have prospered in being the ruling power of the planet advancing humanity instead of Americans. That is not evil, that is national right.
For the meatheads stuck in concentration camps, I will explain again, that Jewish elders sold their ghetto vermin to work camps for profit. These work camps were geared to drive the German economy for economic expansion. They were successful, but the ghetto dwellers carried lice in typhus. That is what the "showers" were, they were delousing stations not gas chambers. Once Americans and Russians bombed the German supply lines though, these work camps became starvation camps, whereby disease spread in a plague. How the Germans dealt with the infested dead was to burn them.
There simply was never the infrastructure or fuel to holocaust burn up 6 million Jews.

The sewer which America has become is what the shit hole Germany was degraded to by leftists. The evil Donald Trump is, is the evil Adolf Hilter is, in they were both financed by Jewish banking and they were evil for espousing the natural rights of the native born citizen.

In this examination, beyond  the hysteria and ignorance, the reality is America is crumbling and can not afford a future. The Bible predicts a war is coming to end all human life if the days are not shortened. For what is coming, it is going to require a Putin, a Kim, a Xi, a Kurz for those nationalities to survive, and America's best chance is Donald Trump. Peace is not coming, but a Great Eurasian War. To offset the premier leaders which are appearing, America is going to need Donald Trump in ways she never nightmared  about. It is not about living, but will be about survivors.

So it is not about evil, nor about National Socialism, but about men who in international wars in death struggles who can protect a remnant of their population and finance to survive to promote them for a new generation. Adolf Hitler's genius accomplished this in defeat in his intelligence agents and science peopled both the Soviet and American spheres as German finance funded it all for the world which is now and is being torn down.
Donald Trump is America's best chance, and therefore the world's best chance to emerge out of the coming real holocaust with a remnant in which civilization will not have to begin again from caves and stone hammers.

This is about the piece of America which may or may not survive and the ignorant gnashing their teeth over Trump are shortsighted in their flat world misperceptions. This is not about little beaner vermin fabricated racism to shove liberal cock up their boy butt anus for pedo pleasures. This is about the survival of a moral base who can rebuild from ruins and not become rats in the rubble.


‘Trump-Nazi’ Comparisons are Absurd, Inappropriate & Reflect an Ignorance of History…And is the Left Projecting Their Own Totalitarianism