The Mongrels on American Lands 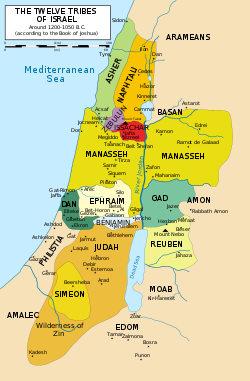 Now that Donald Trump has engaged in expanding the borders of Great Judah, the Lame Cherry addresses for the BILLIONS and the thousands of American dead and wounded in this fight, demands the RIGHT OF RETURN in her lands in the Middle East, as the Bible is quite specific in where Americans were located, and even more specific that on Christ's Return, Americans will be planted in these lands again.

Americans are the children of Joseph, first born son of  Rachel with Jacob, and their father is the first born son in Manasseh. The Tribe of Manasseh was the most large and powerful of the tribes. She occupied both sides of the Jordan in a powerful contingent being Gilead. It was of this group that in exile the name Amyrgia appeared in the forerunner of the Americans.
Americans were also the first tribe to go into captivity to Assyria, and therefore will be by right the first tribe to return in full power and authority.

In the Bible most have heard of the Samaritans. These are not the American Samarians, but mongrel stock sown onto American lands there. II Kings lists the peoples there and their apostasy and how God sent lions among them to kill them.. They were a group of people from the Mideast in different sectors as it was a reality in that period of time that in order to keep uprisings from happening, entire populations were moved out of their homelands to other areas.


23 Until the LORD removed Israel out of his sight, as he had said by all his servants the prophets. So was Israel carried away out of their own land to Assyria unto this day.
24 And the king of Assyria brought men from Babylon, and from Cuthah, and from Ava, and from Hamath, and from Sepharvaim, and placed them in the cities of Samaria instead of the children of Israel: and they possessed Samaria, and dwelt in the cities thereof.
25 And so it was at the beginning of their dwelling there, that they feared not the LORD: therefore the LORD sent lions among them, which slew some of them.

Ezra the Scribe lists another group of squatters sown into American lands, two of which were Babylonians who also ended up in southern Italy and Persians.
When we hear of the Palestinians, it is the endless parade of these squatters who simply need to be shown the door home and return to the lands they belong in.

That also includes these modern squatters who have displaced the Judahites in these Ashkenaz or Khazarians who are Asians.

Ashkenaz was a son of Japheth, the same line of the Slavics, and inhabited the area which is mostly Turkey and north in the Caucasus. They converted to a form of Jewry, rejecting Christianity and have been a cancer upon humanity in their shekel changers ever since in being loan sharks or creating fractal lending to keep nations in debt.

Here are the maps of where these Kushner Jews belong who deny Jesus the Christ. 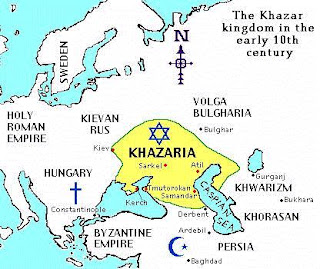 As one can understand they have absolutely no biological or religious right to any of these lands. The vast majority of these mongrels in the Holy Land are squatters who simply need to go home, exactly like these Visa Vermin of Donald Trump in Jesuit Latins and Muslims are a plague in America and do not belong there, but belong with their own people. 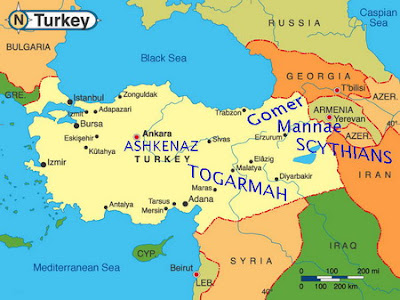 If you look closely on the above map to the "Scythians". That is the area the Americans were exiled to as the Scythians were also called Sammarans which is Samarians, before they broke out of exile from Assyria (modern Germans)  and progressed through Asia, Europe and to America as God intended.

The proof is in the historical maps and the Biblical  geneologies. Most of the land in question is American land in the Mideast and these squatters need to get the hell out like the squatters in the United States must be made to get the hell out, as these same money changers are running both lands and exploiting violence for profit.

Once again, another Lame  Cherry exclusive in matter anti matter.