FRAMEGATE: How the US Mission to the UN was a CIA Operation against Donald Trump 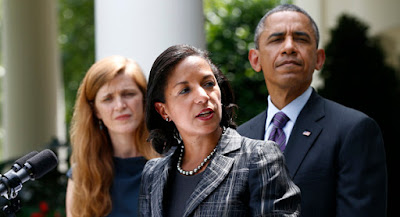 There has been something fishy about former UN ambassador to the United Nations, Samantha Power's statement that she was not the person requesting the unmasking, but that it was others in her name.  What is damning in this is James  Clapper on Hugh Hewitt's show revealed something in he was equally puzzled in  how this Power's explanation could exist.


Asked about Power’s explanation by Hewitt, Clapper suggested that it is cause for concern.
“If that happened, if people usurped the authority to request unmaskings, would that concern you, Director Clapper?” Hewitt asked.
“Yeah, it would,” said Clapper.
“I don’t know quite how that would happen, you know, because the only way you can make an unmasking request is that you have authorized access to the report in question in the first place.”
“So I don’t know how that, quite how that would work,” he added.


I was reviewing the US mission to the United Nation's site and it is both damning and telling. Did you know that the UN Ambassador has their own luxury suite in New York City? How about that there are numbers of sections in operation, in there are a host of people working for Samantha Power.

The Executive Office of the U.S. Permanent Representative (PR) to the UN provides strategic counsel and operational support to the PR. The Executive Section’s policy team coordinates between the other sections in the Mission on cross-cutting issues, provides oversight and quality control on products for the PR, and develops recommendations for potential PR travel, speeches, and public engagements.  The Executive Section’s operational team provides administrative support to the PR, including trip logistics, scheduling, and event planning.

The Lame Cherry is about to provide you with the explanation on Samantha Power in what was taking place, as in reality Samantha Power had CLASSIFIED INFORMATION. The reason her staff did not have this information is because they did not have the security clearance to make the request for the documents or the unmasking. This is a crime in Ms.Power giving access to her staff and then her staff committing fraud in using her name to unmask the identities of Americans.

That is on the surface of this, and this is as big of crime as Hillary Clinton's criminal misuse of intelligence files. What this blog is about to reveal to you though is that what this red flags at is simply this. We all  know that all the United Nations ambassadors and their staff are all intelligence agents of their respective nations involved in espionage. The United States is not any different, and somewhere with Samantha Power, she handed  over her position at the UN to the CIA and it was their operative who were using her name as a cover.
This is a bizarre group in  Sec. of State John Kerry is the one with Strobe Talbot  who fed the original smear out of London  MI6 into American intelligence and specifically Peter Strzok of the FBI who began Operation Crossfire Hurricane framing Donald Trump.
Power's CIA staff appears to be a clearing house for this John Brennan operation against Donald Trump. See in oversight, Congress could ask Brennan if  he was involved in this, and he would deny it as  he has, as James Clapper has, because the Obama White House  in  NSA  Susan Rice had coordinated this so that Power would be the cover or her CIA assets would be running the data mining operation, which then would out of State feed this back to the FBI or Brennan's task force.

It explains a great deal  why Jack Lew of Treasury was involved seizing Donald Trump' financial records illegally. There was compartmentalization in this to keep oversight in the dark. This is why Susan Rice sent herself that email in Obama ordering to keep this legal, a image Obama knew this group was running a criminal CIA intelligence operation inside America, against Americans, and it was coordinated with MI6 to install Hillary Clinton.

This entire Framegate has been exposing intelligence operations in America right and left as stations  were burned. The flame thrower in Samantha Power is the CIA division running out of the US Mission to the United Nations, as they were instructed to do the data mining on Donald Trump.

These are high crimes, punishable by a noose around the neck, as these crimes  are this serious.  It is why Jeff  Sessions and Rob Rosenstein keep stonewalling as they are both CIA front men, and this entire company group is protecting the CIA wing which was running this operation.

Once again, another Lame  Cherry exclusive in matter anti matter.