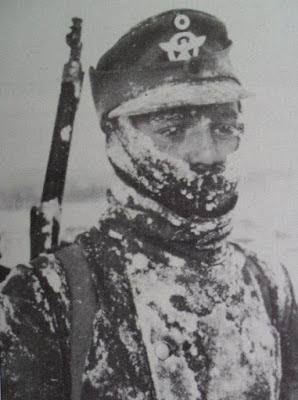 
I have learned one thing in our friend Butch who recently died, had exemplary taste in literature. He discovered books which were hidden gems in the masterpieces of the art of warfare and the real history which is what must be known.

As an example, when the Germans were retreating out of Russia at the end of 1943 AD  in the year of our Lord, an Arctic blast struck them with over 50 degrees below zero, and they hardly had the clothing for protection.
It was a real blizzard, not like these things termed blizzards now in America if there is a puff of wind and some snow. This thing raged for days.

The Landsers had to kick and rifle butt themselves to move each other along in that cold.  Those that feel suffered frostbite immediately, and in that a group of them happened upon a farm in the storm where they heard Russian voices from a burned out house.
The Landsers retreated but death by the storm awaited  them, so they approached again and burrowed into a straw stack.

The interesting part of this is, the German 98 k rifle had stopped working as they were too well machined and the metal bound on each other. So they were literally defenseless. The second interesting part is the Russian communists burrowed into the other side of the straw stack to stay alive too.

For two more days this storm raged, and on the day it ended, the Germans were aghast to discover their weapons had thawed out from their body heat  in the straw and that meant the Russians were ready for action too.

A scout was sent out, and soon discovered that the Russians had retreated earlier from the Germans, saving a close fire fight.

It was a rare case where God in nature had stopped the fighting. For those who think the Germans had the storm gods againt them, they are wrong, because in their retreat, the weather often provided them cover and protection.
In one instance the Germans were marching along in a heavy snow, and soon discovered next to them were the silhouettes of Soviets marching in the same line. The Germans passed the word quietly of the situation and simply melted away into the snow and let the Russians march away from them.

God always has His side in the war and He will have mercy on those He chooses.