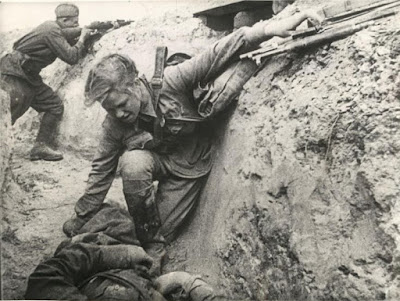 
The Landsers of the German Army in World War II in the year of our Lord in 1943 AD,  were 19 year old boys, boys who had been conscripted a few months earlier at age 18 to proudly serve in the liberation of Europe from communists in the east.

Those that had survived the summer of 1943, were now in a hard selling withdrawal out of Russia and were on the Dneiper making as stand. Everything was in short supply, and food was not available at all. These well groomed Austrian German youth, the epitome of God's cleanliness at home, were now covered in filth of mud, sweat, urine, blood, muck, oil and their own shit, because all they were eating now were the salted cucumbers which the Ukrainians had put up in their now abandoned huts.

What time there was for clean up was worthless as muddy water and shitty clothes produced, wet shitty muddy clothes which were as unhealthy as they were from the onset of the diarrhea.

It was peculiar in this, that the medical corp officers would often appear to inspect the Landser's genitals. In the British army it was feet which brought the severest punishment, in America it was the dirty rifle which brought about the wrath of God,  but in the German it was having a septic cock.
The Landsers were all stripped in the canteen and the ambulance men would inspect each cock for discharge of venereal disease, inflammation in being shit covered, mycoses were all a product of improper hygiene. This the German army issued the harshest of penalties for.

These are the histories which do not make it into historical accounts.