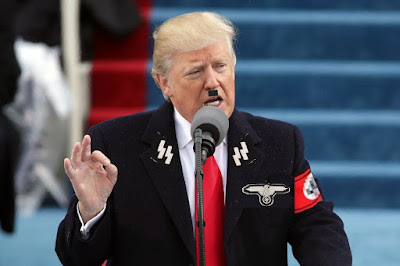 Rick Perry will pick your pockets clean for me
as Gary Cohn left you nothing but lint after my tax plan.

Yesterday the Daily Caller had a most interesting article on promoting the aborting of the ethanol production in America, which produces energy in rural states, paying money to farmers for fuel produced instead of terrorists in the Middle East.

I have posted on this subject numerous times, when Big Koch was giving talking points to Rush Limbaugh to destroy this program, using fraudulent statistics like including the price of a combine into a gallon of alcohol to spike production costs.

Now we have this rant coming again from the Daily Caller from a Jew named Bernard Weinstein from the Maguire Energy Institute.


Let’s GET RID OF The Ethanol Mandate, Not Reform It


Rather than modify the RFS, as some politicians have proposed, the public would be better served by killing the mandate because its economic and environmental costs far exceed its benefits.
Bernard L. Weinstein is associate director of the Maguire Energy Institute and an adjunct professor of business economics in Southern Methodist University’s Cox School of Business.

So you get who this is calling for ending ethanol production in America, you soon enough see this is Texas Big Oil who is behind this. The reason being as America become an energy producer, these billionaires want to get rid of the competition and that means farmers.

See without ethanol to extend gasoline supplies, America would be paying 10 dollars a gallon for gas.

Bruce Bullock serves as the director of the Maguire Energy Institute. He is often cited by the media as an expert in oil and gas and is a frequent guest speaker for trade associations, civic groups and other groups with a stake in energy. Bullock served on the staff of the Speaker of the Texas House ...

Business economist Bernard Weinstein, associate director of the Maguire Energy Institute, offered an economic forecast for Texas and the Southwest.

Director. Bruce Bullock has served as director of the Maguire Energy Institute since May 2007. Since his arrival, Mr. Bullock has steered the Institute's programs energy education, energy policy and economics, and preparing students for careers in energy.

What I desire each of you to know is, that your electric bills are up 3 times in price, because Obama signed into law a mandate that 40% of your electricity comes from wind and solar, WHICH IS ALL SUBSIDIZED, but none of these billionaires is bitching about this, because they are being paid by the government to build this unstable power grid and making a killing off of each of you.

This is exactly what Maguire is being paid for, is to produce papers to destroy American farmers, so Big Oil can charge you 10 bucks a gallon as Donald Trump makes you compete with Eurasians for your oil. That is the scam in this. As I stated before Big Koch wanted the ethanol subsidies ended, because they own the monopoly on production and do not want any competing plants started. Now Big Oil wants ethanol crushed so that they will have an absolute monopoly on your gas and inflate the prices the way they do on electricity.

Now you know what frauds are over at the Daily Caller. For them to feature Big Oil trashing American farmers is the swamp and the same Wall Street rapine as Goldman Sachs writing the tax codes for Trump.

Those are the facts and now you know the scam being generated by Rick Perry of the DOE for Texas Big Oil and Donald Trump is not doing a thing about it, nor is Ag Secretary Sonny Purdue doing a thing to protect any of us.

Once again only the Lame Cherry is pointing all this energy scam out. Why has Donald Trump not built one blessed coal fired power plant in America to drop electric prices? Did you know that Spain is running the wind power in America gouging you?

When it comes to the billionaire nation rapists nothing has changed under Donald Trump. It has gotten worse and now those frauds at the Daily Caller have revealed who is paying that propaganda outlet.