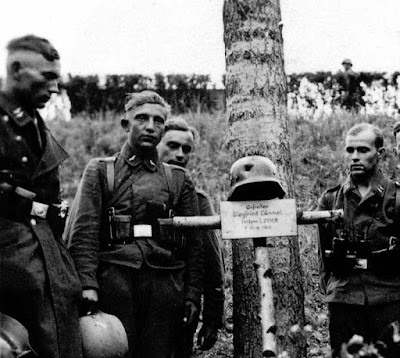 
What was it like to face the Russians in combat?

In October of 1943 on the Dnieper, the Soviets with a 20 to 1 superiority fell on Mountain Jagers of the German Army, with 400 artillery pieces and 220 multiple rocket launchers with the help of Franklin Roosevelt of the United States supplying weapons.

The Soviets had drafted every breathing male aged 14 to 60 with no deferments. All would be fodder for Stalin's war against Germany for Roosevelt and with Roosevelt distracting Japan in the Pacific, it allowed Stalin to mass his eastern forces in the west.

The Russians conscripted received 2 days of training and a military jacket to wear over their civilian clothes, as they were not meant to survive, as only the first waves of Russians had Nagant rifles, with the following waves unarmed they were to pick up the weapons of the dead Russians  and fight with them.

At 15,000 bombs per hour the Russians bombed the German positions, and when it stopped, the Landsers arose in the bomb heated earth to make their stand against the communists. The Landsers were the true Soldiers in they were the product of self control, experience in battle, luck, courage and the will to defend their position with desperate fighting.

It was the first time that the Landers witnessed the NKVD, Russian state police mass shooting Russians who fled the battle. It was a matter that the conscripted were going to perish that day draining German munitions or dying by the hand of Roosevelt's supplied weapons.

The dead Russians piled so high on the Dneiper that day in October that it impeded the progress of the coming waves of Russians behind them. Then came the T 34 tanks in a ritual which was most horrifying, if witnessing the kind of slaughter from the German side, because the piles of corpses would not stop the tanks. Instead what met the Germans ears was the popping of bodies like balloons as the tanks tread on the corpses and what followed was the sound of bones snapping like wooden sticks.

This type of macabre terror affected the German Landsers and it drove them to an insane fury to fight as it did the Russians. When the Germans ran out of ammunition, they emerged from their positions and used bayonets and shovels to kill Russians, but still the Russian came on, were repelled and beaten back as this Stalin butchery used up the German army.

The Mauser 98 was carried by the Landsers for normal fighting, but when it came to close combat like this in waves, their MP 40 assault weapons were their chosen prescription of the disease that affected Russians which was called Stalin.

That is what it was like to fight Russians. FDR had his war and was supplying Stalin the weapons of mass destruction, but it was not against Germany alone. It was against the Russian people.


It was October 9th, 1943 AD in the year of our Lord, and Americans were being told that it was the Germans who were the evil and that Stalin was a friend to Franklin Roosevelt.


It is past the generations of time that the true history be written over the leftist propaganda of the victors.