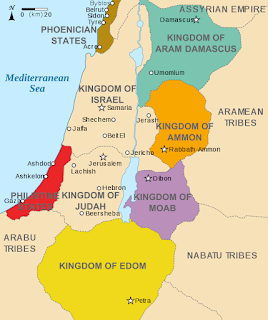 This is a short lesson on the future which the Holy Ghost provided me in study in the duality of Prophecy in Ezekiel the Prophet, chapter 25. It deals with the following


8 Thus saith the Lord GOD; Because that Moab and Seir do say, Behold, the house of Judah is like unto all the heathen;

12 Thus saith the Lord GOD; Because that Edom hath dealt against the house of Judah by taking vengeance, and hath greatly offended, and revenged himself upon them;

15 Thus saith the Lord GOD; Because the Philistines have dealt by revenge, and have taken vengeance with a despiteful heart, to destroy it for the old hatred;

The above peoples were ancient peoples, but are modern peoples. Ammon is Amman in part of Jordan. Moab and Sier, were Edomites who are the Turks. The Philistines are modern Palestinians or the people of Gaza. All Muslims and not really changed from the lord of the flies to molech baby butchers of old, who polluted the 13 tribes of Israel and whose cults pollute America and the West today, with the Christ denier Ashkenaz who dominated Judah.

There is a coming war to the region in which these peoples will be laid waste again. This is not Armageddon nor is it the passages dealing with the destruction of Gaza and Damascus. This is a retribution from God.
If President Trump would have kept his word, and simply made peace with Russia, built the 3rd Temple and removed America from aggressor friction points, this would have been a much better situation for Americans, but that is neither here nor there, as that is what it is.

God will lay His vengeance upon them and the purpose will be so that these Muslims will know that He is God and God is not the moon demon allah.

This is not to say that America is not going to be Judged for its unrepentant, as that is other Scripture. This is just a fragment of the Judgments will be carried out, and are posted here to hasten the process along as Word spoken is Word sown.