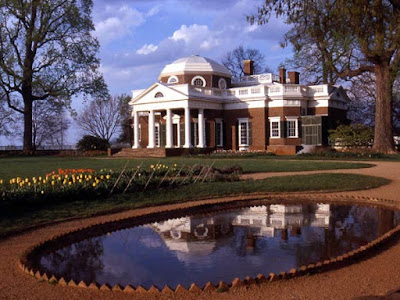 It is stated that the foremost horticulturalist in America had 18 varieties of apples on his property at Monticello and of them, he focused on only four varieties.

That is what this post concerns in an examination of the tastes and times of Thomas Jefferson and his four apples.


Hewes' Crab and Taliaferro -- or as a dessert fruit for the table -- Newtown or Albemarle Pippin and Esopus Spitzenburg.

Hewe's Crab was a rather large crab apple and used only for hard cider, which was predominant in America, until the German immigrants arrived 150 years later and began brewing a nation of beer drinkers in the Midwest breweries which dominated America.

The Hewe's Crab (also called Virginia Crab, Hughes's Crab and Red Hughes, is a small-sized apple that was popular for cider making in the southern United States in the 18th and 19th centuries and was grown at Monticello by Thomas Jefferson 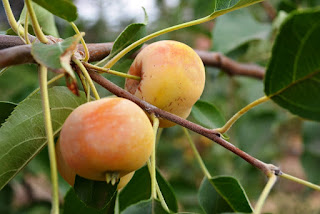 Spitzenburg is one of my favorites and by the Grace of God, Raintree Nursery of Washington state was running a closeout sale on this apple a number of years ago and I purchased one. It was a mixture of joy and sadness as it succumbed to apple scab. It is said to be a bi annual, and  only had one good year off of it, but it was one of the nicest apples off the tree, and I adored the spots on the apple and how pretty it was.

Considering this apple was over 200 years old, it was phenomenal in how good it was. It surpassed Delicious and most of the older varieties like Baldwin and Winesap which followed it.  I have always desired to obtain a few hundred seeds of this apple and see if in a cross it would become more disease resistant. Regrettably the seeds I did have, I was not skilled in spouting and they lay in the fridge forever and never did sprout.


They are fairly large, oblong, and have red skin and crisp flesh. Like many late-season apples, they improve with a few weeks of cool storage, which brings them to their full, rich flavor. Hedrick praised this apple as attractive and keeping well in cold storage, but added that it was imperfect in that the trees lack vigor and are vulnerable to apple scab. 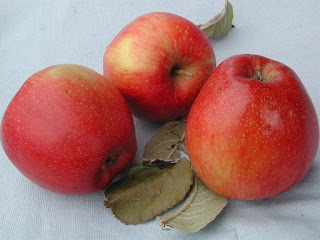 This is the apple I have always sneered at, in the entire Pippin class of English apples. I have never been impressed with east coasts apples, and having experienced apples from 100 years ago I never went back for seconds. That is why I am intrigued again with Pippin, because of the explanation in this apple of having a piney aroma.
See that is the flavor I get as a base in that Evercrisp which is run by those soul sellers of that monopoly requiring thousands of dollars to even get a tree from them. That is fascinating in none of the Minnesota apples or Japanese apples which Evercrisp is based upon ever hinted at pine, and somehow there is a throwback in this apple which is of the Pippin line.
It makes me want to revisit this apple, as I would love to visit apples like Winter Banana, but Stokes purchased Johnny Miller's orchard and they simply suck in not providing the hundreds of old varieties I used to spend hours reading about in that catalogue.

The Newtown Pippin is typically light green, sometimes with a yellow tinge. It is often russeted around the stem. The flesh is yellow and crisp. The flavor is complex and somewhat tart, and requires storage to develop properly; some sources ascribe to it a piney aroma. Green and yellow varieties are sometimes distinguished but it is not clear that they are in fact distinct cultivars. It is one of the best keeping apples. 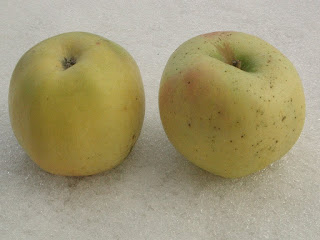 Lastly, as I love mysteries and am saddened to the extreme for lost apple varieties in the Robertson or Taliaferro, which is pronounced in English, Tolliver.

The history of this apple is that it was a foundling, and a military officer named Taliaferro in Virginia asked the owner if he could pick the apples who was named Robertson, upon which a most 'champagne of hard apple ciders" was produced.

America used to produce volumes of hard cider, and all of these asstard college experts and breeders who always say that no apple produces true from parent, are missing what Johnny Appleseed and others knew, in they were planting cider apples, so of course they all tasted like sucking on acorn pith, as these apples were high in tannin.

Taliaferro is still hunted for, and if any readers know of an apple somewhere tucked away that matches the descriptions below, they should contact the Jefferson heritage gardens and mention they might have a Toliver tree, as no one can find it, but there is a close apple in type called Red Coat, as apparently Toliver has stumpy limbs, is yellowish with red, is full of juice and what is rare in a cider apple, the Toliver according to Thomas Jefferson was good for fresh eating.
There are mix ups in this apple with others, but the fresh eating part is what was distinct about this cider apple.
It just seems impossible that an apple tree that Thomas Jefferson championed simply disappeared in the finest cider apple ever produced.

The 'Taliaferro' (pr. "Tolliver"), 'Robinson' or 'Robertson' was a small-sized apple grown at Monticello by Thomas Jefferson. This cultivar appears to be extinct, though some horticulturalists assert that the 'Highland County' cultivar may be related, or even the same cultivar under a different name


In a 29 June 1814 letter to Dr James Mease, Thomas Jefferson wrote
"[The Taliaferro apple] is not a crab, but a seedling which grew alone in a large old field near Williamsburg, where the seed had probably been dropt by some bird. Major Taliaferro of that neighbourhood remarking it once to be very full of apples, got permission of the owner of the ground to gather them. From this he made a cask of cyder which, in the estimation of every one who tasted it, was the finest they had ever seen. He grafted an orchard from it, as did also his son-in-law our late chancellor Wythe. The cider constantly made from this, was preferred by every person to the crab or any cyder ever known in this state, and it still retains its character in the different places to which it has been transferred. 1 am familiar with it, and have no hesitation in pronouncing it much superior to the Hugh's crab. It has more body, is less acid, and comes nearer to the silky Champaign than any other. Major Taliaferro called it the Robertson apple from the name of the person owning the parent tree, but subsequently it has more justly and generally been distinguished by the name of the Taliaferro apple, after him to whom we are indebted for the discovery of its valuable properties. It is the most juicy apple I have ever known, and is very refreshing as an eating apple." 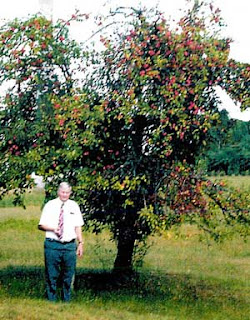 These are Thomas Jefferson's favorite four. I would that I had the time to grow cider apples as I enjoy brewing beer and vinting wine. Distillation is in my bloodlines, but the things I would invest hours in just do not have the time to experience now and I see not any way they ever will.

I will though continue sprouting trees when the Lord provides the land and there will be hundreds of new varieties littering the landscape, but I fully plan to screw our land up in attaching riders to it, that ponds must be maintained, orchards can not be bulldozed and buildings not removed. I will not care if the property produces vast sums of wealth for others, as this is about a future where people will have things I never had and always wanted, an apple tree no one else has ever tasted as it is something God planted.