The Scratch Shot 7 Times Over 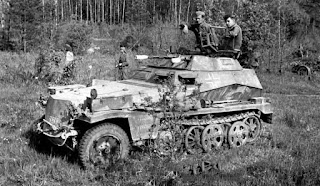 
Necessity is called the Mother of Invention, and yet there are not tools on the battlefield nor time to create inventions when the communists appear with new weapons and all you have is a rifle and grenade.

The Soviets in 1943 in pushing the Germans back from the Eastern Front tried using tanks to protect their infantry, but the communists were morons in tactics in they drove the tanks ahead and left the infantry to be counterstruck by the Reich Soldiers.  A  new tact appeared though in  the first armoured personnel carriers or half tracks. With these the communists rode inside protected and  if the Germans attempted the old tactics of rushing from fox holes, they would be shot down by the infantry disembarking immediately.

That is why the desperation of a German Marksman  proved beyond invention as he studied thee approaching communist hordes, he noted that there was a hole in which the driver would lookout. It was not much of a hole, but it was a slit.
The Marksman laid out his tent square for a solid rest and then put his scope on that slit, and he thought he could see the Russian's eyes.
The German had loaded a Russian explosive bullet and at 70 yards, he fired at a 10 by 30 centimeter opening, and blew the Russian's head off.

Soon the APC was swerving away and was heading for a ditch where it tipped over. After that the Russians disembarked from the crashed transport and the German Landsers made short work of them.

Many would call this a scratch shot, but with 20 remaining explosive bullets, and 12 APC's, the Marksman knocked  out 7 of the vehicles and the remaining 5 broke through, but in hard  hand to hand combat, the Germans obliterated the Russians.

That is one of the most amazing feats in military history and yet it was  not a fluke in the  least. A German using a weapon the Russians according to the Geneva Convention should not have deployed against Germans, made excellent cost ration of one expensive bullet which took minutes to produce to destroy an APC which was very expensive that required weeks to produce.


As it is literally impossible to find photos of these Soviet APC's from World War II, the German Marksman must have stung them so bad  that they ceased making these death traps.