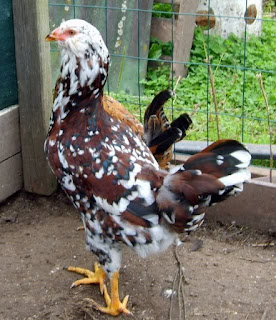 
An Austrian Marksman before his death as a hero or World War II, related the following tale of a most secretive of operations inside the German lines on the Russian Front. It was an operation of utmost importance undertaken by a group of Landsers who were on the outskirts of the regular army as they were scouts.

Being on the outskirts meant they  were like George and Libby Custer in the US Army in the Cavalry never had a home base, so they could not plant gardens, have nice things or any creature comforts as in an adequate food supply. Food is what this operation was about as a Sargent in the next company over had a pet hen chicken he had obtained from the Russians and named her Josephine.
Josephine laid him an egg a day to eat or to barter. That is interesting as General Phil Sheridan of the American army as an observer in the French and German war, noted that Bismark was scrounging for eggs too as their ration for the day.

The Austrian was chosen  as the chicken rustler while his accomplices would prepare the coals to cook Josephine. This was not just a small matter as pet chickens and stealing things could get you shot in the army at worst and busted at the least.

The Scout actually put on more camo that cloudy  night than he normally would in hunting Soviets, but he crept along to the chicken cage, there were two guards talking to each other as Josephine had her head tucked under her wing fast asleep in her security.
He lifted the cage up, Josephine did not stir. The guards did not look. He grabbed the chicken's neck  and quickly snapped it. He froze. The guards were still talking to each other, and with that, he slinked away into the night with his prize supper.

The runners had the fire kindled, had Josephine picked, gutted and roasting, with the evidence buried as quick  as it takes to read this, and when Josephine was ready, she was toasted with beer and schnapps in grand style, as the Landsers had been eating cucumbers and shitting themselves for months.

The next morning the real war began as the Sargent was bellowing so loud that he woke the hungover Landsers in ranting about where his missing hen was. He soon arrived in the Landsers company bellowing that the tracks  went toward them, and he knew it was one of those scoundrels who had killed his chicken.

The rustlers did their best in a hangover to look innocent, but the Sargent was glaring at them, and kept threatening to have them shot personally, and as he stalked away, he threatened to find the evidence, have them face court martial and have them shot as looters.

The Sargent never did find the evidence and the Landsers survived the most dangerous operation ever behind  the German lines on the Russian Front.