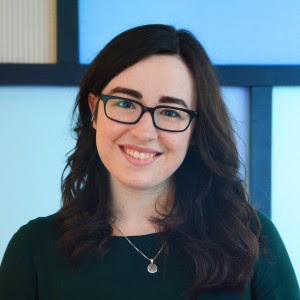 Personally, I have been most interested in how the FBI has been targeting Americans, with that Trump stench, because I personally wonder just how much of  this was behind the FBI forwarding my name to the Department of Homeland Security in August of 2016 AD in the year of our Lord, in order to interview me.
In my case, Homeland knew it was an absolute waste of time, but they had to follow up. Homeland has agents who are professional, skilled in interrogation and do their job well being sent to the middle of nowhere.
I know my case is never going to get a Congressional inquiry as to exactly what was behind it all in the many levels, but when I watch someone like Allison Hrabar violating the rights of Homeland Security in public, I  wonder how vacuous these activists are, as preening in DC disrupting someone's dinner is a bit different when your name gets entered into the FBI database and they show up at your doorstep or your workplace to interview you.

I have noted that President Trump is using the rope a dope, in these attacks fomented against the First Lady, and now this new operation where an airhead activist thinks this is all their idea, when they are being manipulated to this, if Hrabar is not a DOJ operative to foment this, which does one thing in activating Trump voters to create the coming Trump party.
See being nasty to Secretary Nielsen does one thing, in it cements the public in her sphere and makes these lunatics even more off putting.

So you get this as it is lost in this puzzle deliberately, Donald Trump is making you focus on ILLEGALS, who are not coming into America in mass, because Donald Trump by Homeland under John Kelly, opened the VISA programs pouring in legals who can never be deported at 1.5 million a year. See you are being suckered in this rope a dope and no one will remind you of the reality of this, as the Mockingbird desires you to focus on the distraction.

Director Nielsen has ever right to eat in restaurant. The owner has a legal responsibility to protect his paying clients, no matter what he says in being pleased this assault took place. Harassment is just that. No one can "remind" people by harassing them or disrupting a restaurant where other patrons are paying for a meal, not chanting threats.

The problem in this is how this insanity on the left is manifesting, in Peter Fonda, posted his own heinous verbal rape against Director Nielsen.
Calling a woman a gash is disgusting. Calling for a woman to be stripped naked, put into a cage and whipped is a terroristic threat.
The word PILLORIED is used by Fonda, and that is from pillory, in Peter Fonda is calling for a woman to be bent over in public, with her head and hands in wooden stocks, with her genitals exposed as she is attacked by the mob, and whipped. That is sadism and is a threat against one of the Chief Law Enforcement Officers in the country.

That is what is bizarre to me in Homeland was sent to my doorstep for trying to save America and protect Americans. Peter Fonda threatens a woman with gang rape and law enforcement does not appear. 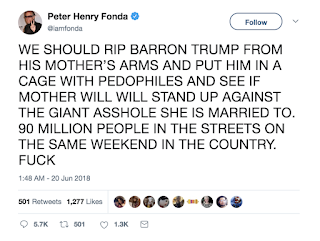 If you noticed, Peter Fonda has a neurosis in being fixated on locking people in cages, more to the point Fonda desires women and children in cages where they can be raped. That kind of degrading of humans to animals is what allows Fonda to use Soviet gang rape as a political tool to destroy those who are not in agreement with a fellow traveler.

As most of you will require reminding, this blog in the archives examined the attempted assassination of Theodore Roosevelt. It was a fact that the establishment Republicans and democrats produced a mob frenzy in the media, that eventually an unbalanced person took a shot at the President in thee American Heartland.

This is all factored in by those ramping up these events as the attempted murder of Steve Scalise is evident. The call for stalking public figures, confronting them, and in Fonda's case putting them into cages to gang rape them, are the removal of societal norms of common respect. The rights of one person end where another person's rights begin.
Director Nielsen has the right to be in public dining and not having her meal disrupted. Her protestors have the right to protest, but not when that protest invades the personal zone of the Director.

Violence is being stoked as it was in 2016. This time though it is moving against the Trump Junta's employees or Republicans in organized stalking. The lines are going to be crossed, as someone is going to throw something, pick up a knife off a table, or as in Scalise's case, is going to bring a firearm along. This is perpetrated by the actors to goad some nut into taking the shot, as was accomplished with President Theodore  Roosevelt in Wisconsin, while those doing the goading sit in their luxury and are never charged.

Anyone observing Allison Hrabar can ascertain this snowflake is not operating in reality by her educated 1000 yard stare.
In a former world of Beaver Cleaver, June and Ward would be telling Wally and Beaver to not be hanging around with the stupid kid who is going to get J Edgar Hoover strip searching you at Alcatraz. You do realize that even Lumpy and Eddie were not stupid enough to be chasing around government officials, who have guns, because they just might blow a hole in you and that ends all the debate points.

See here is an example, wacko snowflake screams with their friends at a Trump agent, who is armed, and one of them slaps agent, and said agent pulls out gun and blows holes in the slappers. That ends the protest as governments always end protests.
Kent State or the Steve Scalise event sort of prove that. You don't need a gun to get shot by those who do have guns.

To get to that point is Amnesty is the focal point in what is driving all of this in Mr. President wants amnesty, the GOP wants amnesty and democrats want amnesty, or fast tracking Visa Vermin as this is what this is all about.
Mexican meals disrupted is the distraction. The reality is who will get hurt to get that amnesty. It is never the principles, and always some Scalise or Rand Paul who get scuffed. Sometime they get 30 days by liberal judges hoping for more violence and sometimes they end up in the morgue.

It never turns out well for pawns like Cindy Sheehan or Seth Rich. They get used by the machine and left for dead or dead. That is what is wrong with 1000 yard educated stares. They think they are immune to Department of Homeland Security bullets and that your name ending up on FBI files is not something that triggers when your tag is run by every cop you pass or the day you grow up and decide like most liberals that you really need a gun to protect you from the exciting liberal you were significant to who was just a lunatic like you.

Just remember that Kushner media is feeding this as Sunprancer dines from the table. Understand this is an operation to manipulate you just as in 2016 AD in the year of our Lord.