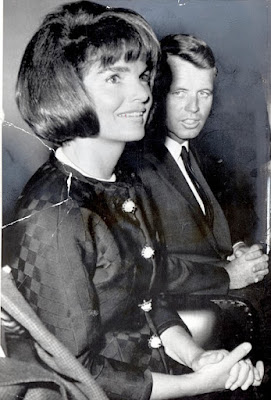 Like with his brother, the trashier histories of RFK link him romantically to several prominent figures, such as Marilyn Monroe, Candice Bergen, sister-in-law Jackie, and even ballet dancer Rudolf Nureyev.

Bobby Kennedy referred to Ronald Reagan as a SON OF A BITCH, after Ronald Reagan mopped the floor with RFK in a debate. Yes this is the guy Mike Pence idolizes, a foul mouthed prick that Ronald Reagan obliterated intellectually.

On May 15, 1967, the giants of the left and right met on CBS News. The topic: "The Image of America and the Youth of the World." Students from around the world who were studying at British universities submitted the questions from London.
"To those unfamiliar with Reagan's big-league savvy, the ease with which he fielded questions about Vietnam may have come as a revelation," Newsweek gushed. "Political rookie Reagan ... left old campaigner Kennedy blinking when the session ended." A 2007 article in the conservative-leaning magazine National Review commented that "Kennedy himself conceded defeat to Reagan, telling his aides after the debate to never again put him on the same stage with 'that son-of-a-bitch.' Kennedy was heard to ask immediately after the debate, 'Who the f—- got me into this?'

And speaking of what a mental midget Bobby Kennedy was........he flunked 3rd grade. Who the hell flunks 3rd grade!!!


Ethel urged a group of third-graders not to be discouraged if they did not always do well at their lessons. 'After all, Bobby had to repeat third grade,' she said brightly,"


Then it was said that Robert Kennedy was the most religious of the Kennedy clan.

The metamorphosis of the ruthless Bobby Kennedy - The ...


For those who are not familiar with RFK, while he was Attorney General, he tried throwing a US General in Germany into an insane asylum for being CONSERVATIVE.

In case in all of this you forgot this is Mike Pence's hero he was praising, and that Bobby Kennedy was lecherous  adulterer, try this link where RFK covered up JFK's nailing a communist spy by deporting the woman.


Kennedy and Ford both had affairs with the same East German ...

How Kennedy and Ford both had affairs with the same East German ... Germany and married air ... then-Attorney General Bobby Kennedy had Ms Romestch ...


and what kind of child did RFK leave as his namesake in this world? His wife kicked him out of the house and get a load of what the incestuous little prick told his Aunt.


In 1976, a 19-year-old Robert Jr. was kicked out of the family home by his harried widow mother Ethel and went to crash at his dear old uncle Peter's.
Then married to Ms Lawford Stewart, who was also 19 at the time, Peter briefly left his nephew with his new wife when he went to take a shower, and during that time Robert made an inappropriate first impression.

'Then he said "I wish you weren't married to my uncle - I'd like to f*** you right here on the couch." That was a shocker. I knew him for four minutes,' Ms Lawford Stewart told The New York Post.


This is what Mike Pence admires and inspired him.

“Today marks 50 years since the passing of #RFK—a figure who inspired my youth and inspires me still,”

It literally disgusts the Lame Cherry.