One Shot One Hundred Killed 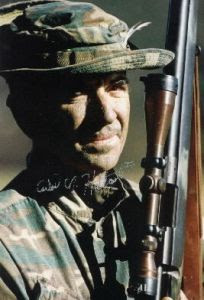 
Snipers enjoy the maxim of One Shot One Kill, but sometimes one shot leads to hundreds if not thousands of kills.

Sgt. Carlos Hathcock a true Marksman Scout, once was sent on a 3 day mission to assassinate a North Vietnamese general.  He was absolutely successful in the kill, but he questioned it afterwards as the killing of one general, set off the communists in such a rage that numbers of Americans died in increased fighting.

It was in this that an Austrian Marksman Scout named Joseph Allerberger, along with his Landser infantry had a break in the horrific fighting on the Eastern Front with the communist Soviets. It allowed the men to wash clothes, smash lice, lay out in the sun, and actually be human for the first time in months.

Allerberger moved through the German lines to the northern most position where he was offered cookies which were stolen and coffee. He soon was out though Scouting again in front of the lines, and as a river separated the Germans and the Russians,  all was quiet on the Eastern Front, until a noise could be heard coming from the river.
The Austrian crawled forward to a small hill, and to his surprise the Russians were all swimming in the river and laying on the beach. The Germans could not see them, so the communists thought themselves safe.

Allerberger was interesting in the dynamics  of his mind. He looked on the scene of peacefulness as a reminder of the hell the communists had put him through, and he thought they did not deserve it, so at 600 meters, he raised his scope over the head of a lounging Russian and pulled the trigger to see if he could make the shot, as his job was to always harrass the enemy.

At the shot, the Russian rolled over being hit in the gut, and immediately the Russians were in a flurry and fury, as they unlimbered a mortar and started walking it toward Allerberger had shot from.
The Scout was off  the hill and away to the German lines as the communists leveled the hill.

The Germans there were furious as the one shot had broken their interlude and soon artillery was raining down on their  position with no effect, but the war was back on.

Allerberger finding himself in hostile company returned to his command, but it is a reality that sometimes one shot kills many.

Would it have been better to have not fired? In the long of it, it would not have stopped the mass rapes or murders the communists carried out. It did stop the false peace, but that peace was going to end once the Russians could produce enough active firepower to obliterate the Germans when they crossed the river.
That is the dichotomy in this, as even in Hathcock's case, more Americans died, but all he did was lance the boil which was going to rupture later as a fight was going to come which would unleash the communist fury, and Americans dying later would not have changed the outcome in that war for profit.

That is the problem when Soldiers begin thinking that a trigger makes them like God. They are not in the arena to save lives, but to take them ruthlessly as they demoralize the enemy so the enemy stops fighting.
The communists were adept at blowing off body parts of wounded Germans exposed in the open, and it had nothing to do with German Marksmen, as the Soviets were murdering in mass German officers by practice on the Eastern Front from the start of the war.
Thee only reality which can be gleaned from any of this is that Hathcock's dead General and Allerberger's dead communist did not live to cause the rape or murder of one German or American ever again. That is what war is about.

When a shot presents itself, a Soldier takes it. Those who get caught up in moral issues of letting the enemy live, soon enough discover the guts and brains of their comrades decorating their uniforms and faces as the enemy took the shot as that is what war is.

It is an interesting study in psychololgy, but it is not worth the study or examination when one factors in the reality of war in how it progresses to what it is, as war is filled with inhumane actions made legal by the side which has unleashed the most vicious methods to break their enemy.

The mistake is never in the Marksman's trigger. The mistake is leadership not providing adequate enough firepower to obliterate the enemy from making a response.