Paul Manafort in Prison for Thinking 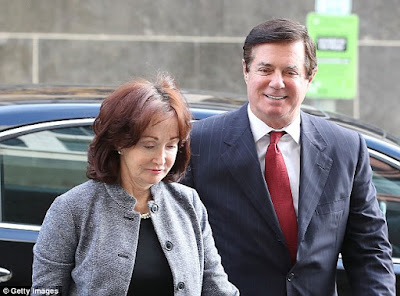 Paul Manafort has been put into federal prison, because Robert Mueller is apparently spying on him to such an extent that any communications he receives or sends is being monitored in this witch hunt, and an Obama out of control bench sitter is more than happy to throw Manafort in prison or go after the Catholics to force them to abort babies.

I want you to understand something in this as liberals cheer this lynching. Paul Manafort did not do anything but THINK. His "violation" according to Mueller is that Manafort was speaking with a friend in Ukraine, NOT THE UNITED STATES who was writing an op ed to lay out the facts in the Manafort case.
The Obama bench sitter had issued a gag order for Manafort to apparently not speak to the press in America, but last time I checked the Ukraine is not America, so the question in this is how did Robert Mueller know what is going on in Ukraine and when did the FBI annex Ukraine and the rest of the world to decide that Paul Manafort could not talk to a friend?


“Even if the ghostwritten op-ed were entirely accurate, fair, and balanced, it would be a violation of this Court’s November 8 Order if it had been published,” the prosecutors wrote. “The editorial clearly was undertaken to influence the public’s opinion of defendant Manafort, or else there would be no reason to seek its publication (much less for Manafort and his long-time associate to ghostwrite it in another’s name).”

The Lame Cherry has had immense problems with the over reach of the United States which began with US Courts indicting Manuel Noriega, the President of Panama in US Courts for President George HW Bush as Bush wanted him gone.
I have watched the BATFE in Iraq, a US agency which is only a domestic agency, was in a foreign nation tracking whatever from alcohol, tobacco, firearms or maybe explosives. The point being China does not have any right to send in some Peking agency to Utah to meddle in things, so why do these  indulgent US agencies think they can rule the world in meddling in foreign nations.

A US Court can gag anyone for reason. That is the US jurisdiction, meaning that Court can silence for reason any American or foreigner inside the United States or territories from speaking to the press. It has zero authority in Ukraine or England or Mexico. So if Paul Manafort wants to talk to people in those nations, he has every right to speak to them and the US Courts can not do a thing about it. In this, Mueller could use those writings if they are Manafort quotes implicate him in a crime, then that could be used in court with the reporter swearing to it, but this nonsense of US Courts and agencies spying on foreign lands for court cases, or enforcing US laws is something the Constitution never provided for.

This is anti American in every form. Benjamin Franklin often penned letters under other names that the British would have hung him for, but he was not doing that in England where their courts could get at him. The British courts in America could, but they did nothing to enforce such lunacy as they knew the extent of the British power.

Paul Manafort is now in prison at age 69, facing a death sentence because of this entire Robert Mueller witch hunt. He is in prison not for colluding with Russia in the elections. He is being investigated on "crimes" which were sanctioned under President George W. Bush for activities not in America, but in Ukraine where the United States has zero authority. Paul Manafort is in prison for thinking and talking to a friend in a foreign nation.

There is not any system in America. There is only this cancerous police state making criminals out of Robin Hood, because the people of the land are not in power, and King John's court is murdering them for contending with them.

There is not any system. The system is a method of law and order which polices itself in a system of checks an balances. There are no longer checks in this system so all balance is neutralized to protect the Citizen from harm. This is a cancer now which eats with a voracious  appetite to destroy all it targets. It's over reach is beyond the bounds of the Courts in the Constitution and the borders of these United States.

The Courts were designed to protect the Citizen from the police, but that has vanished as the Courts are now accomplices of the Mueller police state to destroy a United States Citizen.

Remember how this all started in the FBI in a pre dawn raid, broke into Paul Manafort's home and searched his elderly wife in her nightgown. This all began with Robert Mueller having the FBI feeling up an old lady.

That is the reality in this.