Put on a layer of Ice for Winter Insulation 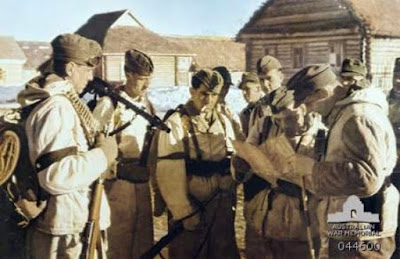 This decree says it is an honor to die for the Fatherland
frozen to death in your own sweat...

For several years it was deemed defeatist by Berlin to prepare for a Russian winter in fighting in the field, as the Wehrmacht was supposed to have one the Russian front in six months. This resulted in the reality that German Soldiers had to steal clothes from dead Russians and sleep in lice infested huts in order to try and survive 50 below weather.

Berlin finally did arrive with some relief in the winter of 1943 when new snow uniforms were issued the freezing troops who thought they had gone to Valhalla.  They were remarkable reversible wool coveralls, white on one side and camo on the other.
Soon enough the Landsers discovered that the outside layers tore and let in moisture, so that the inside wool trapped moisture, making it a frozen death trap. The suits in reality became solid as they froze like washed clothing on the line from sweat and humidity.
It was not any better in the new felt shoes they received as they froze too, but had the added luxury of being the perfect material for lice to burrow into and hide, and breed.

The clothing was warm when it was dry, in fact too warm, but it had to be used in dry cold, and then it made the Landser's sweat so they were bathed in a water of their own perspiration.

As soon as spring arrived and the Landsers moved west away from this frozen hell, they discarded their snow suits and left them to rot.

What the Germans instead discovered, was besides Russian clothing, they were better off with thick underwear, blankets and tent squares as outer clothing to keep warm.

In fact one Marksman, had his own camo clothing made in a simple camouflage shirt and a white coveralls of cotton that was easily carried and rolled up in his pack.

All armies face the reality of winter cold. The Americans in the fight against Indian terrorists, discovered that buffalo robes made into overcoats were the only means of keeping them warm in 1877 AD in the year of our Lord. The Indians called the Soldiers, Walking Heaps. It is the reality of the reality, that the bureaucracy always has all of these wonderful ideas for equipment and men, and under real conditions the failings of these inventions soon appear to the disgust of those not only have to fight a war, but having to try and survive their leader's stupidity.