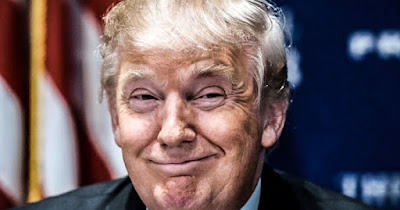 If you desire to know how successful Donald Trump is, there is ample evidence in all of the news stories being featured, that it appears out of a dozen "Russians" who approached the Trump campaign, that all of them were paid FBI assets, apparently sent in by John Brennan of CIA to entrap Donald Trump in collusion.
This appears to be the  "insurance policy" which Peter Strzok was texting the violated Lisa Page about how they would stop Donald Trump from being President.


In that back drop of the FBI running TRUMPSCAM on the Trump Campaign, it is evident that Jeff Sessions, Rod Rosenstein and Christopher Wray are involved in an immense  cover up of evidence of all of this Trumpscam.
The reports that the FBI was not going to access Strzok or Page's personal mails, have leaked out from other sources where Strzok made comments about Americans having a stench about them in those who voted for Donald Trump.
Bank on the following exclusive from Lame Cherry.  The GOP leadership who are pushing this investigation KNOW what is in the DOJ and FBI files.  They have been informed of the content by FBI whistleblowers and the NSA. That is why they are like bulldogs  in  not letting go of this an this is why Jeff Sessions of the deep state with Rod Rosenstein and Christopher Wray are involved in this desperate cover up. It is said that there are scandals which will bring down a government. What is contained in these files will bring down the Department of Justice in America. The content is that criminal conspiracy against the US elections.


Devin Nunes: If DOJ Does Not Turn Over Documents by Monday – They Will Have ‘Hell to Pay’ by Wednesday


The most certain sign of the problems  in this is the insecurity which is erupting in psychosis in the liberal  herd. They band together for protection, but some of their masses are defecting in admiring Donald Trump and others who are left are acting out in the most desperate lunatic content. They are becoming pariahs in progressing political rape against women in the worst assaults.

The left is become a toxic cancer unto itself. Their voice is becoming a primal scream in a pit of humans become animals gnawing off their body parts. This will only become worse, as the reality that in my Republican woods, for some reason Last Man Standing re runs are the only ones at night that are always joined in progress and are interrupted with all sorts of reports and this is on a FOX station.

That is what winning looks like, but do not look to close as Donald Trump is as this blog stated defeating Conservatives across the board as he did in Alabama, as his is not the Christian  Conservative Party, but is in fact a group of RHINO Republicans, as the Trump agenda is not to keep his promises but to promote the Jew Street finance as he keeps the socialists in control of this Nazi conglomerate party.

Watch the reality of Peter Strzok, in he is either going to combat the GOP or he is about to turn evidence to bring this all crashing down even faster.


Peter Strzok: I volunteer to testify before Congress - Hot Air

Peter Strzok, who was singled out in a recent Justice Department inspector general report for the politically charged messages, would be willing to testify without immunity, and he would not invoke his Fifth Amendment rights in response to any question, his attorney, Aitan Goelman, said in an ...


Thee only way Peter Strzok can clear his name is to put the blame on others who ordered this fellow traveler to break US Laws. That means John Brennan, James Comey, Andrew McCabe and Birther Hussein. As stated in all the evidence which has come out, Strzok can not say anything to put aside the lies about Anthony Wiener, Hillary Clinton and his implementing a coup against Donald Trump.