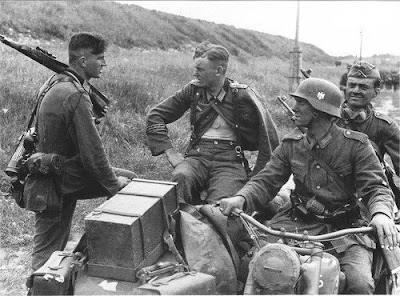 The following is an account of the methods of two Landsers in the Wehrmacht who were Marksmen in Josef Roth and Joseph Allerberger, who interestingly were both of the Gebirgsjagers, Mountain Troops, and were both Austrians.

Both were accomplished riflemen, Roth having the higher confirmed kills, but Allerberger being the better Scout. There was an incident which brought these two together, and allowed them the opportunity to join their craft together and in both instances they adopted the most proven strategies in angular firing, or overlapping fire in fields of fire, which is predominantly a term used for machine gunners.

In the first instance, a communist sniper was murdering Landsers and the duo were called in to solve the situation. The Russian was well hidden, so the Germans waited, and another Landser a few hours later was picked off throwing his excrement over the trench wall. The Marksman had been watching the Russian line and saw the grass sway from the bullet shockwave leaving the barrel of the sniper's rifle.

The duo spread themselves apart 50 meters to triangulate, provided the sniper with a fake  target of a helmet to fire at and when the communist fired, they would both fire into the hole he was hiding, which had been dug through a dam in the Russian lines.

It worked perfectly in they killed the sniper most effectively.


In another instance in battlefield charges, the duo provided overlapping fire by design to hide their positions. They agreed that until the communist hordes charging them gained 100 meters, they would crossfire, and after that they would shoot at the marks in front of them.
The reason for this is, there is a no man's land in overlapping fire of a dead zone which once that is breached unless the shooter takes out that threat, that threat will come to them, because that is the blind spot of the other shooter.
Human eyes are binocular, in frontal view. The human eye does not see out of the side of the head.

This is a fascinating and effective case study in the ability of Marksmen utilizing angular firing to achieve objectives in protecting their positions.
There are lessons in this for the Marksmen. The sniper is worthless in these terms as they are long range sniping which has little effect in combat or seasoned operatives.