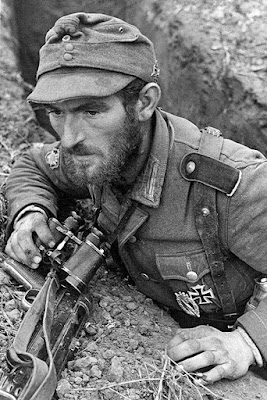 "What is that perfect instinct, that will to survive, which in heinous times feeds so willingly off the lives of others, discarding them away, with the excuse that, "They made me do it", that after all of that bartering of honesty and life, when life becomes too much a burden, that the instinct to live, becomes the instinct to die".


It was the Eastern Front, 1943, and a winnowing process had gone over a dozen times before, for there were Landsers in the riflemen and then there were the Landsers in the Marksmen, in now truer tale of survival, for in the sniper there was an intelligent instinct to survive and not to die.

Two Russians had burst into the trenches of the German infantry. The first Russian had his head split like a melon when a Landser by instinct swung at the communist with his shovel. The rest of the Landsers though parried their fate as the Russian was experienced with the bayonet and was killing them one by one.
The Landsers did not attempt to team up on the Russian, but took him on one by one, and died.

The sniper in the trench over watched the horror of the death offering and understood. They were all filthy, covered in excrement and lice, exhausted and wanted out of this misery at whatever the cost would be. Some simply allowed themselves to be killed in order to end it all as the instinct was now to die.
The sniper watched in morbid fascination and tried to get a shot to kill the Russian, but he did not want to hit his own men. Finally at the last Landser left, the sniper blew the face off the Russian, whose brains, blood and bone splattered on the last Landser, who looking down, seeing he had been rescued, immediately had the instinct to survive restored and moved over to be with the sniper.

There was more to being a survivor than knowing how to shoot. It was the self control in every situation. To take action and to react properly to situations, instead of having reactions to events, by instinct, even in the worst of impossible situations where death was certain, is what set the Marksmen apart from the riflemen.

Marksmen were better trained than riflemen, because they had the instinct to survive and in their learning process of death, were intelligent enough to not make the same mistake twice and in most cases not make the first mistake at all.

It was instinct to choose a position on the field even for the Marksman. There always had to be cover for escape, because once the Russians targeted a location where a sniper was, the heavy fire followed. Not choosing in an escape route and hastening quickly from it, soon weeded out the snipers for they took a chance of the odds against them.

For those that attempted to survive the bad choices there were two choices left. Stay in the position which brought death, or there was the hasensprung, the rabbit run, the springing jump out of the hole and the dodging and running for your life, which usually ended in that life being cut down too.
The rabbit run was the last resort for the Marksman, but that was always after something had gone very wrong. Still in that run, there was the instinct to survive, as the instinct to die was what belonged to the others whose corpses littered the steaming sulphur cratered pits called the front line.