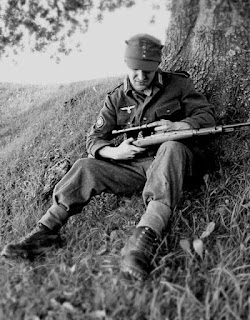 It was in the year of 1943 AD in the year of our Lord, that the Godless Soviet communists had pushed back the Germans from Donetsk to the Dneiper. It was here on this stand that a nameless Austria Landser in the depleted German ranks, sat in his fox hole as a massive Soviet barage began in the early morning hours.

The artillery in it's roar had a higher chorus of wounded and dying Germans in this half hour symphony, that in the midst of this a shell detonated close, leaving the Landser stunned and not able to hear, as a lump of something landed in the front of his fox hole stunning him further in puzzlement as to what it was.

As the daze cleared, the Landser realized it was the shattered remains of another Landser. His limbs shattered and blown off. All that remained was the torso and mouth perfectly untouched, and the mouth began to speak.

It began with the questions of why it was dark. Why he could not see. As realization and pain crept in, he began to scream as his shattered wounds bled him out, and he realized he was blind and that his hands were gone.
He continued to scream and in that the Landser prayed in terror, going mad in the horror before him and around him.
Gott ließ ihn sterben, the Lander prayed, translated, God let him die.

The Landser was screaming inside for the other Landser to die, and after an eternity, the body grew quiet, twitched and passed over.

Soon enough the artillery ceased, and the Germans began attending their wounded as the Russians pressed with an attack, and the Landser rose from the horrors he had just experienced and performed his task flawlessly as a 19 year old recruit, a Marksman, shooting Russians, moving to pick up dead Russian ammunition packs, shooting more, picking locations to fire from before his fire would be located, and continuing on this day in his war in 1943 AD in the year of our Lord, as the Germans decided to sell out hard all the way back to Germany in never giving an inch to the communist hordes of the east.