The Legend and Raquel Welch


This article starts out with the little photo above linked to a site about trivia. I knew it was Dick Cavet and after blowing it up, I knew this was Raquel Welch.

I rarely do things like this on this blog, but I am going to write about Raquel Welch in surprising you with how this successful woman built a career more outstanding, more far reaching and more stunning than any of the biggest names in show business from Katherine Hepburn to Betty Davis to Meryl Streep.

Nothing came easy for Jo Raquel Tejada, born the year before world war engulfed the earth, but in that people always think she is a Mexican, but her perfect grammar belies this Chicago born native. Her family is the source for the genius of this woman as her father, Armando Carlos Tejada Urquizo, was an aeronautical engineer born in Columbia while her mother, Josephine Sarah Hall, was the daughter of architect Emery Stanford Hall.
Yes Raquel Welch with her second husband Patrick Curtis seized upon her being marketed as a sex symbol, but behind that image was a great deal of genius.

Instead of marketing Raquel as a Latin, they instead chose to have her keep her first husband's name of Welch who was her high school sweetheart. When the studios tried to get her change her first name to Debbie, she refused as she wanted her real name, and the studios were wrong in people could remember and pronounce the name.

Raquel Welch became thee international sex symbol. She literally obliterated the Blonde Bombshell image which  Hollywood created and reached it's height in Marilyn Monroe. Fittingly, this Christian raised girl never did a nude scene, and as Hugh Hefner put it when she refused to appear nude in Playboy, "Some women do not need to be naked to be sexy".


She has had her ups and downs in life, and that is what makes her perseverance remarkable.  She made herself to be who she wanted, not a Hollywood stereotype. She had to work to support her two children in divorce as a cocktail waitress in Texas. She was blacklisted by the studios when they blamed her for troubles on a movie and she won in court over 10 million dollars from the jury.
All the way through this, Raquel Welch was always her own woman, and no one has ever said a bad thing about this professional.


"What I do on the screen is not to be equated with what I do in my private life. Privately, I am understated and dislike any hoopla"

Thee most beautiful woman in a generation and none of it ever went to her head as it would lesser souls.


I am going to diverge here to her acting performances as I still love the movie Hannie Caulder, where she plays a woman who is gang raped, learns to shoot a gun and tracks her rapists down and kills every one of them. For those who say Hollywood never has any good roles, those women never took on the roles that Raquel Welch did or Maureen O'Hara.

I submit that the best performance of Raquel Welch was her starring role in The Legend of Walks Far Woman. 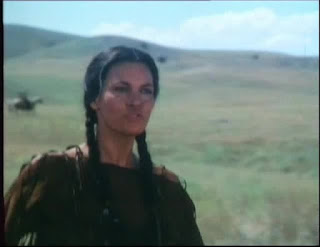 This is the story of a Plains Indian named Walks Far Woman in her life. In reading the reviews of it, the Indians went nuts like they always do bitching about people not being Indian enough for something they dream up as Russell Means stands like a statue thinking that is a performance as he mumbled lines.

It stills stuns me that none of the executives got this made of television movie as they all hated it, but when it finally aired in America, it was the highest rated movie of the year on TV. That is the power of Raquel Welch in the actress and person she is. She drew in the audience and she held the audience for the full two hours.

The film aired in the UK in 1980. It was not screened in the US until 1982 because some NBC executives thought it was "a disaster". Brandon Tartikoff of NBC cut 25 minutes from the film before it aired.
The New York Times said "there is nothing dreadfully wrong with Miss Welch's performance... it's just that the entire story is boring."
It was the highest rated TV movie of the year


What is most poignant about this which pissed the Buck Indians off was Walks Far was married to a lazy ass, like most Indian males were. She was forced to go and hunt herself for food, on horse with a rifle as most Squaws had to do all the heavy lifting. When her husband beats her, she kills him and is then banished by the tribe.
The closing scene is she is befriended by Whites who tell her she has to have a White name as her life will be easier if she can pass as an American. To this Raquel Welch's character refuses and keeps stating even then in her helpless condition that she is Walks Far Woman.

That is in a great mirror image a testimony of the reflection of Raquel Welch who never gave up and is a good example of never giving up in the hardest of businesses.

She is always going to be one of my favorite stars, because she is a star. She held her own with the legends like Jimmy Stewart, John Wayne, Robert Culp, Ernest Borgnine and Frank Sinatra. Whatever makes a person a star, Raquel Welch is one of the few who has it in spades.

I would that Raquel Welch would have gotten better roles in film and television, or more to the point gotten the roles that other women ruined who were "Hollywood" liberals and casting couch.

I have no idea what political party Raquel Welch is, or what she thinks about all the nutty issues and I appreciate her adult self control in not imposing herself on the world. That shows her security in who she is a a woman and it is why she is one of the rarest of souls alive.

It simply is amazing to me that a woman could look as beautiful as she has her entire life. She still turns heads and every generation knows who she is as she has that snap which says, "Here am I, a star".

With that this post closes in celebration of someone who was as big off screen as she was on screen, by her determination and perseverance of just making something of her life which is admirable.

For those who stuck with this, here is your reward with the first picture in full size. Not many women could pull of wearing something like this and the word gorgeous comes to mind.

That is Raquel Welch. 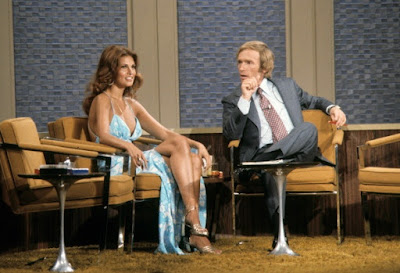