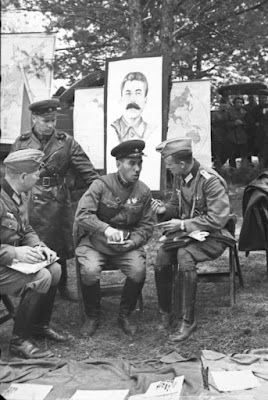 There was a reason President George Washington and the Founders warned of not being involved in Eurasian Wars. It was because they knew of the Eurasian duplicity and what murderous rapists their military all were.

The following is a tale from the Russian Front, 1943, so that each of you comprehend what war with Moscow is, from Afghanistan mines blowing up children to Chechnya rape and torture, when Ivana  makes war, it is from the Russian communist soul.

There had been a  softening up of the German lines by the Soviets, and Berlin had not provided any adequate supplies for her infantry. When it came to tanks, all the rifleman had were grenades, their rifle or a demolition pack. It required a hiding in foxholes unseen, because if the Soviets saw your location they would run the tanks on top of you and bury you in the avalanche of dirt. Hiding to the tank getting 30 feet from your position, and then jumping out and attempting to place a grenade pack on the tank or placing a demolition pack under the track, as at 30 feet the tank could not hit you, but the infantry could.

Fear is what prevailed as everyone tried to crawl into their holes. At 100 feet from a Marksman's position a Landser lost his nerve and ran. He was immediately cut down by  machine gun fire from the Soviet infantry. In a macabre theater which followed, Ivan began rolling at the Landser with his tank. The Landser could not move as his legs had been shot off, and he waited in horror with a plan to escape in letting the tank come and then rolling away a fast as he could.
It was either by skill or fate that the tank followed the crippled Soldier though as when he rolled, the tank chased and followed.

With that the shredded legs and pants were caught by the tank's treads, and soon the tank was rolling up on the pinned down Soldier. As the track rolled up the body and onto the pelvis, the pressure built and the human showed his teeth like a horse in a ghastly expression of pain.
This grinning expression is what was shown to all as his head swelled from the pressure and turned red like a watermelon in summer.
The body then burst into this red and German green disappeared under the tank. The tank having churned the remains into a grave on the spot in the end of a life.

Civilized people always speak of the Geneva Convention. The Russian communists never observed this in the least in their atrocities in World War II. The reason the world instead was treated to the propaganda of barbaric Germans  was to hide what the Americans and British were complicit in with FDR's friend  Joe Stalin of Moscow. Beastly Germans rightfully emancipating themselves from slavery treaties were excoriated by the Jews who used the Germans to get a homeland, after their elders sold the poor ghetto dwellers to the Nazi work camps, as the Jewish Bolsheviks had to create the lies about Germans in order to cover up the crimes against humanity which the Soviets heaped upon a civilized People.

Remember the above story and consider how civilized the Germans really were as they never unleashed as they could have in having their people murdered like this daily.