The Whores of War 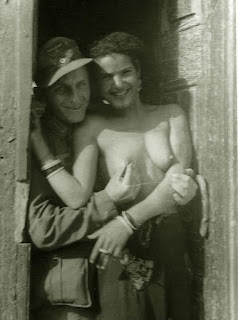 When I turn the nipple, I can hear Berlin

Whores are an integral part of history. The British used them as spies. The Germans allowed traveling brothels to take the edge off the men. The Americans were upstanding in bartering bread for starving cunts and the Russians simply allowed mass rape of the populace or dumped deplorable women, like Christians, off trains to be gang raped to death by the sons of communism.

Yes the underbelly or the rubbing of bellies is the history of war which no one really ever examines. The Americans like to think their boys in green were all virtuous in lectures on "French girls have nigger blood in them and you do not want to bring that home to America to be frowned upon", but the reality is without any outlet the Americans were capitalist extortion for sexual release.
It is why their new Obama method of embedding cunt and ass into foxholes for rape and sale, is actually better for the locals as American pussy and tail is in the barracks. Not so much for the Dutch who like raping little boys. In that case, there is not any provision for drafting children into the fat and frumper corps of NATO.

In World War II, the Reich provided for brothels, or more to the point, their Medical Corp camped out at various establishments converted to brothels for the boys to partake of carnal release. This is not to say that the Nazi's condoned this, as there were really different rankings in this.
There were in the top rankings the Officer's Mattresses, as the enlisted called them. There were always women in every locality who would be whore for protection, for food, for being the officer's woman so she had status. Then there were the whores who the NCO's and Sgt's got first crack at, and then there were the enlisted who really had only the option of raping the locals which did cause problems and also subdued them, unless of course a road show brothel was made available and policed by the Medical Corps.

Whores were the gambit though, as some German Soldiers to get off the front lines would option for sexual disease instead of shooting themselves. Of course the Reich caught onto this quick and their methods of dealing with it, was not the most pleasant. Instead, syphilis would cause scabs in the urethra which would be blocking urine flow. So a round file was developed to be inserted into the tube to break it open again.
There of course was not any anesthetist in this, so receiving this treatment tended to instill a virtue inside of the shirkers that you could die for the Fatherland, you could shoot yourself like a coward or you could have a file rammed up your cock so you could piss. There did not seem to be many repeat performers in infecting themselves deliberately with the treatment of the file up the cock as an educator.

After a half hour of this, the Soldier would be wiped clean and be on his way, only to be accosted by the Medical Sgt. again bellowing at the boy something like, "Well you got your noodle cleaned up their girl, but that is not all there is".

With that, a 100 cm syringe would appear, loaded with a sulfur concoction, which would have the end shoved into the tip of the freshly dewed cock by a whore and the entire concoction would be injected, with the mandatory prescription of the Soldier would hold this for five minutes in his bladder to burn out all the germs.

Burn is the key in this explanation as it burned like bladder infection stoked by the sun. The boys would prance around and groan, and the time clock would extend as there was great joy in making these young pricks suffer. After the appropriate misery, the boys were granted release in a piss, and that piss often was better than the sex in the effects they felt in getting rid of the burning concoction.

Old hands at this lined up and took it like men. It was the remedy for sex disease and once your virgin tubes had been scorched the effect was not so bad after that psychologically.

This is the real history which none of you are aware of. The history of raped German women by Russians, befriending naive Americans who thought they were the fathers and ended up as war brides, and the the naive families who saw their heroes home and never realized they were trading camp rations to starving German girls for a hard fuck.

Russian raped. Germans provided brothels, the Japanese had comfort girls,  the French seemed to use whatever was available, and the Americans used capitalism, and evolved in the Obama era to just putting the anus and vulva into a uniform as why make a GI barter for it when the girls and fags were ready and willing to give it up. 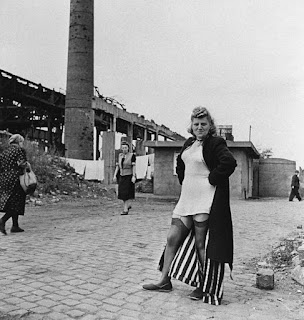 And this is what the average Fritz got